With cries mimicking the red wolf, red and blue blankets draped across their shoulders and beaded moccasins on their feet, a procession of men raise their gourds to the sky in solidarity. 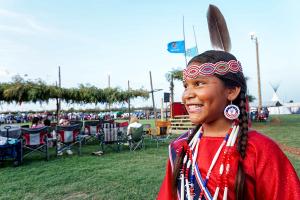 CARNEGIE, OKLAHOMA - " When summer rolls around each year, the Kiowa Gourd Clan, a warrior society belonging to the Kiowa Tribe of Oklahoma, honors the red wolf with song and dance.

According to their forefathers, the red wolf gifted the tribe with a traditional dance known as the Gourd Dance.But for some years, the group has been searching for a permanent place to carry on the sacred practice, says Phil R. Dupoint, vice president of the Kiowa Gourd Clan.

Laws in the late 1800s ended many sacred practices among Native American tribes, and some of the land once used for the traditional gatherings was confiscated by local authorities.

Amanda Hill, GPJ Tribal NationsBeginning this year, the Kiowa Gourd Clan gets to call a stretch of land their own, on 10 acres in Carnegie, a town in southwestern Oklahoma. Days before the three-day Gourd Dance ceremonial, their family members and friends filled the newly established tribal park with their canvas arbors, tipis and tents. Members of the tribe say the new park means they'll be able to revive age-old Kiowa practices.Before 1957, when the Kiowa Gourd Clan was formed, Kiowa elders and warriors gathered and danced on family allotments because they didn't have a permanent site to hold their ceremonials, says Timothy Tsoodle, president of the clan.

In the years that followed, Taft Hainta, then president of the Kiowa Gourd Clan, cleared land in what is now Carnegie Park with equipment borrowed from the local Bureau of Indian Affairs office, Tsoodle says.

A yearly contract with the town's government allowed the Kiowa people to move the Gourd Dance ceremonial and other tribal events from family homes to the cleared area in Carnegie Park, a public recreational area. But when plans surfaced early this year for new infrastructure near Carnegie Park, the Kiowa Gourd Clan was left searching for land to host this year's event, Dupoint says.

In the mornings, Kiowa children belonging to the Rabbit Society gather to dance and clean the arena.  Amanda Hill, GPJ Tribal NationsAs part of its Eight-Year Construction Work Plan, the Oklahoma Department of Transportation began construction of a bridge over part of the land in the park that Dupoint and other members of the Kiowa Gourd Clan had been using. Global Press Journal contacted the department multiple times for a comment but did not receive a response.

Using tribal land in Carnegie south of the Kiowa Tribal Complex, the buildings where the tribe's government offices are located, the Kiowa people set out to create their first tribal park. With help from a local contractor, Kiowa people built a park with campgrounds, parking, a permanent dance arena, concession stands and a flagpole.

While the idea of putting up such an establishment on land owned by the Kiowa came up in previous years, it never came to fruition because of a lack of funding, says Matthew Martin Komalty, the tribe's chairman. Without revealing how much the tribal park cost or how money for the facility was raised, Komalty says construction started in April.The Kiowa Gourd Clan inaugurated the tribal park on July 2 with the annual Gourd Dance ceremonial.

Tsoodle, who took part in the Gourd Dance, says this year's gathering was an opportunity for young members of the tribe to learn about the history behind what the clan of 150 members does each year.

"There was no better feeling than knowing you are singing for your people at one of their most important celebrations, on their own land " and that feeling right there is what our old folks prayed for," she says. "It felt like home."

But Carnegie residents say the new location has some disadvantages. Vice-mayor Johnnie Goergen, a lifelong resident of Carnegie, says that for many years he has enjoyed driving through the area of Carnegie Park where ceremonials were held.

"I missed it," he says of this year's gathering. "Its new location on tribal land seems more private, and I didn't want to intrude."

Kiowa members gather every day at 2 p.m., to begin the afternoon Gourd Dance sessions. They sing until supper, usually around 5 or 6 p.m. Amanda Hill, GPJ Tribal NationsChristy Turney Ponce, a mother of three whose family has lived across the street from the Carnegie Park for more than 10 years, says that they would gather each year on the front porch of their home, barbecue and listen to the Gourd Dance songs.

"It was just a peaceful feeling," she says. But Ponce admits that the move is for the best and will ensure the preservation of Kiowa culture.

Komalty says he agrees, adding that the new facility will be used for other ceremonials and gatherings throughout the year.