U.S. drills for mass evacuation of Americans from South Korea, but denies war is coming

The military has started an exercise to practice the evacuation of American civilians from Korea. The exercise, which is sure to be seen as a provocation by North Korea, started on Monday, and will run for ten days. North Korea has reacted to these exercises in the past with military demonstrations of its own. 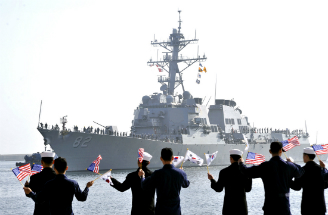 The U.S. Navy has started a 10-day exercise with North Korea.

LOS ANGELES, CA (California Network) -- The Navy has launched joint exercises with South Korea. As part of those exercises, the Navy is rehearsing the evacuation of American, civilian personnel from South Korea. In the event of war, such an evacuation might be necessary.

Commander of the Unites States forces in Korea, Gen. Vincent J. Brooks, said the exercises are not related to current events. â€˝Although not directly tied to current geopolitical events, our forces must be ready in all areas. This training is as important to readiness as out other routine events such as tank gunnery and fighter wing exercises."

The exercises are taking place on both the eastern and western side of the peninsula, and feature the navies and air forces of both the U.S. and South Korea. At least one Ohio class submarine, the USS Michigan, is in the area. The Michigan has been converted to fire large numbers of cruise missiles instead of nuclear ballistic missiles. Cruise missiles can also carry nuclear warheads.

North Korea has warned against these exercises and intelligence reports say they have moved missiles on mobile launchers from Pyongyang to possible launch sites. For the past week, experts have warned that a North Korean missile launch is imminent, but the regime does things when it wants, and not when the world expects.

The North has threatened to launch missiles towards Guam, where a U.S. Air Force base is home to several strategic bombers. They have also threatened to shoot down U.S. aircraft which fly close to North Korea, even if they are in international waters. There are also rumors of a pending nuclear test.

North Korea claims the exercises are a dress rehearsal for a future war with their country. This is certainly true, but that does not mean war is imminent or even inevitable. However, both President Trump and Kim Jong Un of North Korea have exchanged fiery words over the past year. North Korea is developing a nuclear warhead and a missile with the ability to strike the United States. President Trump has declared this development unacceptable.

The international community has also condemned this development, but Russia and China, the two most crucial players in the situation, are also undermining efforts to halt their program by refusing to cooperate fully with sanctions on finance and trade.

Experts believe North Korea is close to demonstrating the ability to strike the USA with a nuclear missile within a matter of months. North Korea claims the capability is defensive, a way to deter the U.S. from invading the North.

Once the missile is developed, it is unlikely the U.S. will fight against North Korea, unless the ability to hack or shoot down the missile reliably develops. No president is likely to risk becoming the victim of a nuclear attack.

If war with North Korea is coming, it will happen sooner than later, but considerable preparations will have to be made in advance. There is no evidence those preparations have been made.