Did Trump lose an aircraft carrier? Are three carriers being sent to stop North Korea?

Free World Class Education
FREE Catholic Classes
The answers aren't clear, even if the problem is.

Confusion abounds following the announcement that the USS Carl Vinson was never in the waters off Korea as promised by the Trump administration. It also remains unclear if the U.S. is planning to deploy three carriers to the Sea of Japan. Meanwhile, the U.S. has announced it will test its missile interceptors in May. 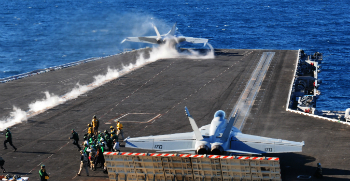 F-18 jets fly from the deck of the USS Carl Vinson.

LOS ANGELES, CA (California Network) -- According to some news sources, Donald Trump lost an aircraft carrier. This is not true. Instead, it appears the Defense Department was not entirely honest with the media, and this is something that should be expected.

Misinformation has commonly been fed to the media as a means of keeping the enemy confused and guessing. The statement that the USS Carl Vinson was sailing to the Sea of Japan was intentional and intended for North Korean consumption.

But instead of sailing north, the USS Carl Vinson appears to have sailed south toward Australia, to participate in joint exercises, before turning north for the Sea of Japan. The carrier and its fleet will arrive later this month.

There is also a question of whether or not additional ships, like the USS Ronald Reagan and the USS Nimitz, will also join. So far, only one Korean news outlet has reported the story, which was cited in coverage including the Daily Mail, Pravda, and Catholic Online.

The deployment of the three carriers is a likely eventuality since that is the measure of firepower that will be needed to contend with North Korea. The question is simply of when. If the carriers are not deployed within the next few weeks, they will have to deploy eventually. Experts believe North Korea is only two to three years away from developing a missile and a nuclear device capable of hitting the continental United States. Kim Jong Un already can strike South Korea and Japan.

In May, the Air Force and Navy will also test interceptor missiles based in Alaska and California. These interceptors have the ability to shoot down a missile in space. Their effectiveness is unclear. The system has failed six of the nine most recent tests.

President Trump has invited China to take the lead in restraining North Korea, but he has pledged the U.S. will take action if China fails. Meanwhile, North Korea vows additional missile tests and continues to issue threats of annihilation against South Korea, Japan and the United States.

At worst, North Korea could potentially destroy part of a city, such as Seoul, in a small nuclear strike, deploying a weapon with half to equal power as the atomic bomb dropped on Hiroshima.

In response, the U.S. could destroy the whole of North Korea within 15 minutes in a strike launched from a single Ohio-class ballistic missile submarine.

If the conflict remains conventional, the North could invade South Korea, inflicting tens of thousands of casualties in a few days of fighting and shelling. The majority of the casualties would come from a surprise attack on civilians in population centers from rockets and long-range artillery.

Beyond that, Allied air-power would quickly destroy North Korea's defenses and air force, after which it would interdict the North's vital supply lines. Within a few days, the North's armies would run out of food, fuel and ammunition. Possibly millions of hapless North Korean troops would be targeted and decimated until the North surrendered.

The wildcard remains China. How much Western intervention will China tolerate? It is likely China will tolerate a reduction of the North's nuclear weapons program, but an invasion or an effort at regime change would be met with powerful resistance.

The Chinese know their best chance at avoiding such a crisis is to restrain North Korea themselves. China does not yet appear to have a coherent or at least discernible plan to do this, but one is certainly in the works. China sees itself as North Korea's chief ally and sponsor, and that relationship comes with strings attached. China will pull strings to compel the North to follow a peaceable path. It is uncertain if those strings will be enough to control Kim Jong Un.

If they aren't enough to control Kim Jong Un, President Trump has three carrier battle groups that are.