More than 50,000 Mexican young people made a pilgrimage Saturday to an iconic monument and shrine to Christ the King, situated atop Cubilete Mountain, over 8,000 feet above sea level in the Guanajuato state of Mexico. 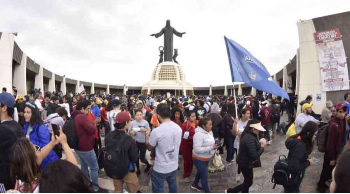 Mexico City, Mexico, (CNA) - More than 50,000 Mexican young people made a pilgrimage Saturday to an iconic monument and shrine to Christ the King, situated atop Cubilete Mountain, over 8,000 feet above sea level in the Guanajuato state of Mexico.

The Witness and Hope Movement, which organizes the annual youth pilgrimage, said in a statement that the young pilgrims committed themselves Jan. 25 "to Mexico in these difficult times of insecurity, economic stagnation and the outside pressure it is undergoing."

Devotion to Christ the King figures largely into Mexican history.

During the 1920's the country's government in power initiated a series of repressive measures and outright persecution against the Church. The Mexican government banned religious orders, restricted public worship, and prohibited priests from wearing clerical attire in public.

Allegiance to Christ the King became a hallmark of resistance, as did the cry "Viva Cristo Rey!"

Mexico was consecrated to Christ the King in 1914 and the consecration was renewed in 1924 and 2013.

The Jan. 25 youth pilgrimage focused on the life of Blessed Anacleto Gonzalez Flores, who was named the patron of the Mexican laity in 2019.

Gonzalez  was arrested, tortured, and killed in 1927 by government forces for his support of the efforts of the National League in Defense of Religious Liberty to resist the persecution of the Church.

According to pilgrimage organizers gave witness "in defense of his faith and love for his homeland, even when such defense cost him his own life."

The statue of Christ the King atop Cubilete Mountain was erected in 1950, in honor of the martyrs of the Cristero War (1926-1929).

Weighing 80 tons and 65 feet tall, it is the largest bronze statue of Christ in the world. Beneath the statue is an adoration chapel. Pope Benedict XVI visited the shrine in 2012.

The statue was built on the site where a smaller statue of Christ was dynamited in 1928 by the government of President Plutarco ElĂ­as Calles.

The Jan. 25 pilgrimage saw "the greatest attendance ever, more than 50,000 young people from all over the country," the Witness and Hope movement said.

Young people "not only want to announce God's plan with our witness but also bravely denounce the injustices and outrages that are committed daily in our country, outrages that on many occasions have led to the loss of peace, tranquility and even the lives of thousands of Mexicans," organizers said.

"We young Catholics of Mexico are tired of the situation our homeland is going through. It's disturbing to be in a country where the authorities say they are for peace but routinely show their interest in legalizing the assault on the lives of the innocent that are still in their mothers' wombs," a spokesman for the movement said.

Young Mexicans "want to publicly take up our role as builders of peace and as defenders of our faith and our principles. We know this is not simple but we're aware of the urgency of doing this."

"As Mexican society it's necessary to combat all those situations of corruption, impunity and illegality that generate violence and reestablish conditions of justice, equality and solidarity that build peace," the spokesman said.

The organization entrusted its efforts to "Mary of Guadalupe, recognizing her as mother and intercessor of all Mexicans and as Queen of Peace."