Priests convicted of abusing children at Argentina school for the deaf 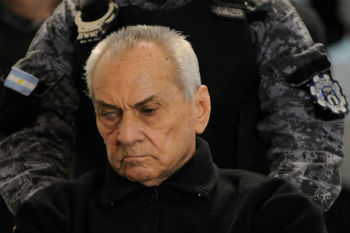 Mendoza, Argentina, (CNA) - Two Catholic priests have been convicted of sexually abusing students students at an institute that cared for deaf children. The priests have been sentenced to more than 40 years in an Argentine prison.

Their victims say one abuser should have been stopped seven years before his arrest, when he was accused of abusing children at a school in Italy.

The abuse took place at the now-closed Antonio Provolo Institute for Deaf and Hearing Impaired children in Argentina's Mendoza province. The trial concerned more than 20 instances of abuse in all, including charges of rape, sexual touching, and corruption of minors. The students were reportedly forced to watch pornography or perform sex acts among themselves.

The cases involve 10 students, though about 20 have made abuse accusations. The abusers especially targeted children who spent the night in the institute's shelters, and the victims said they were afraid to report for fear of living in poverty after being expelled or for fear their parents would be punished.

The students were typically from poor families and had communication limitations. The school did not teach sign language but followed a methodology that aimed to teach children to read and speak like those who could hear, the Washington Post reported in February. Students at the school who used sign language would be physically reprimanded.

The crimes took place from 2004 to 2016, when Corradi, Corbacho, and others were arrested and the school shut down.

After the verdict, victims of the men celebrated outside the courtroom.

"I am happy, thank you so much for the battle, because everyone has supported us. ... This has changed my life, which is evolving," Vanina Garay, 26, told the Associated Press.

Corradi is a member of the Company of Mary, an Italian religious community that operates schools for deaf children in several countries. The schools are named for Antonio Provolo, a nineteenth-century Italian priest who founded Corradi's religious community.

Corradi worked at a sister school in in La Plata, Argentina from 1970 to 1994, and former students have accused him of abuse there as well. Before that, he worked at an Antonio Provolo school in Verona, Italy. He was first accused of abuse in 2009, when 14 Italians reported that they had been abused by priests, religious brothers, and other adults at the Provolo Institute in Verona, over the course of several decades.

They could not face civil prosecution due to statutes of limitations.

After a Vatican investigation, five priests at the Italian institute were sanctioned; but Corradi, then living in Argentina, was not among them. A Vatican investigator believed his sole accuser was a victim of abuse, but because Corradi was accused by so many of abuse and his story showed apparent inconsistencies the investigator doubted the plausibility of his claims, according to the Washington Post.

When the Argentine trial opened on Monday, among those protesting outside of the court was ex-student Ezequiel Villalonga, who is now 18.

"Those of us from the PrĂłvolo in Mendoza said: 'no more fear. We have the power'," he said, according to the Associated Press. Like many other abuse victims at the school, he is harshly critical of Pope Francis,

"Francis was very quiet about the abusive priests, but now the sentence is coming," said Villalonga. "I know that the pope is afraid because the deaf have been brave."

Advocates for the victims have called for the abusers to be dismissed from the clerical state.

The Archdiocese of Mendoza has said it didn't know the Italian priest's background when he came to Argentina. It said the priest depended on his Italian-based religious congregation for support. The archdiocese voiced "solidarity and closeness" with the alleged victims and said that in its view the responsibilities and punishments for the alleged crimes should be established.

"As part of the people of Mendoza, we desire truth and justice, and we put in the hands of God ... the work of whose who have the task of imparting it," the archdiocese said in an Aug. 2 statement.

Two religious sisters who worked at the Mendoza school are accused of participating in the abuse or knowing about it, as are former directors and employees who are accused of knowing of the crimes but not taking action. In 2018 one employee was sentenced to 10 years for rape, sexual touching, and corruption of minors.

Pope Francis previously served as Archbishop of Buenos Aires. He headed the Argentine bishops' conference when the alleged crimes were reported in 2009 and 2010.

In 2014, Corradi was the subject of a letter sent to Pope Francis from Italian victims of sexual abuse who were concerned about the priest's ongoing ministry, despite the accusations against him. In 2015, the group handed a list of priests accused of abuse to the Pope in person, according to the Washington Post.

The group reportedly did not hear back from Pope Francis, but did hear from a Vatican official, Archbishop Giovanni Becciu, who wrote to the group in 2016 to tell them that he had informed the Italian bishops' conference of their request for an investigation.

Later that year, Corradi, as well as Corbacho and another employee of the school, were arrested. When Argentine authorities arrested Corradi and Corbacho, the Washington Post reported, local officials said the Church in Argentina was not fully cooperative with the investigation.