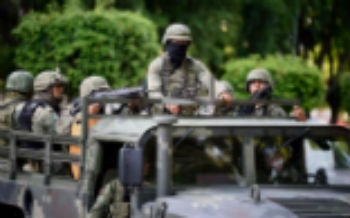 Culiacan, Mexico, (CNA) - Following hours of heavy fighting in a city in Northern Mexico as officials detained and then released the son of imprisoned drug lord JoaquĂ­n "El Chapo" Guzman, the local church called for prayers for peace.

"At a time when fear and insecurity reign in the streets of the Sinaloan capital, we join with those seeking the peace and welfare of Culiacan. We urge unity in prayer to reign in each family and for members of this society to be promoters of reconciliation," said the Diocese of Culiacan in a statement.

The diocese called for "an atmosphere of coexistence to return and for peace to be reestablished soon."

"We ask the members of our city to not put yourselves in risky situations and to be attentive to the instructions that will help us return to our ordinary lives," the statement added.

According to government officials, a patrol of 30 troops of the National Guard and the Secretariat for National Defense discovered Ovidio Guzman Lopez during a routine patrol in the city of Culiacan on Thursday.

Photos from the area showed cars on fire and bodies strewn on the streets. It is not known how many people were killed or injured in the fighting.

With El Chapo - among the most powerful drug traffickers in the world - sentenced to life in prison in the U.S. earlier this year, Guzman Lopez is believed to be partially in charge of the Sinaloa cartel, considered the largest in Mexico.

Auxiliary bishop Alfonso Miranda Guardiola of Monterrey, secretary general of the Mexican Bishops' Conference, voiced his "solidarity, support and closeness" with the people of Culiacan" in a statement on Twitter.

"May God grant you peace, protect you and bless you. We pray for them and for all of Mexico," he said.

In face of the violence, the Diocese of Culiacan has asked people to join in offering the following prayer for the city and for all of Mexico:

"Lord Jesus, you are our peace, look down upon our homeland harmed by violence and dispersed by fear and insecurity. Bring consolation to those suffering in sorrow. Give success to the decisions of those who govern us. Touch the hearts of those who forget that we are brothers and cause suffering and death. Give them the gift of conversion. Protect families, our children, teens and young people, our towns and communities. May we your missionary disciples, responsible citizens, know how to be promoters of justice and peace, so that in you, our people may have a decent life. Amen. Our Lady of Guadalupe, Queen of Peace, pray for us."

Other violent clashes between security forces and criminal elements have also taken place in Mexico in recent days.

On October 15, a confrontation between military forces and armed civilians in the town of Tepochica, in Guerrero state, claimed the lives of an army corporal and 14 alleged criminals, who according to the authorities had "high powered weapons and three vehicles reported stolen."

The previous day, in the town of El Aguaje, in Michoacan state, armed civilians opened fire on state police, killing 14.