The leader of Poland's ruling party praised the Archbishop of Krakow on Sunday for his opposition to the redefinition of marriage and gender ideology in the country. 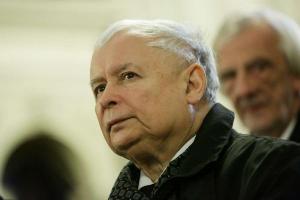 Warsaw, Poland, (CNA) - Jaroslaw Kaczynski, leader of Poland's ruling Law and Justice (PiS) Party, said at a campaign event in Southeast Poland on Aug. 18 that he was "grateful" to Archbishop Marek Jedraszewski for his statement earlier this month that attempts to redefine marriage and impose gender ideology in Poland were part of a "rainbow plague."

Calling the promotion of LGBT ideology a "hard offensive" and a "travelling theatre," Kaczynski said that "we are the ones who are harmed by this, it must be unmasked and discarded," Reuters reported on Sunday.

Archbishop Jedraszewski said in an August 1 homily, commemorating the 75th anniversary of the Warsaw Uprising, that "our land is no longer affected by the red plague, which does not mean that there is no new one that wants to control our souls, hearts and minds," Reuters reported.

That new "plague," he said, is "not Marxist, Bolshevik, but born of the same spirit, neo-Marxist. Not red, but rainbow."

Kaczynski's remarks came at a campaign event for Poland's national parliamentary elections in October, where the redefinition of marriage will be one of the issues of contention as pro-LGBT "pride" events are on the rise in Poland.

Amidst some secular backlash over his remarks, Archbishop Jedraszewski has received statements of support from fellow bishops.

On Sunday, Cardinal Zenon Grocholewski asked 80,000 pilgrims at a Mass and Eucharistic procession at the Marian sanctuary of Kalwaria Zebrzydowska in the Archdiocese of Krakow, to "pray for our dear pastors of our archdiocese, who bravely defend the truth and God's law against all kinds of destructive ideologies." Archbishop Jedraszewski concelebrated the Mass.

On August 8, the president of Poland's conference of bishops, Archbishop StanisĹ'aw GÄ.decki of PoznaĹ", issued a statement in response to recent "polemics" in the country "over the â€~LGBT ideology'," including the "wave of criticism" against Archbishop Jedraszewski over his remarks.

There must be respect for all people including those with same-sex attraction, the archbishop said, but this must never include the "acceptance" of pro-LGBT ideologies.

"People belonging to milieus of the so-called sexual minorities are our brothers and sisters for whom Christ gave his life and whom He wants also to be saved," Archbishop GÄ.decki said.

"Respect for specified individuals cannot, however, lead to the acceptance of an ideology that aims to revolutionize social customs and interpersonal relationships."

He noted "a significant increase in the number of so-called pride marches organized in our country" as well as the planned introduction of a new sex education in schools by local authorities, efforts to redefine marriage and impose gender ideology, and employers discriminating against employees who believe in traditional marriage.

In June, an IKEA store in Krakow fired an employee who quoted verses of Scripture against homosexuality on the company's intranet, as he stated his refusal to attending a pro-LGBT event at the company's request.

The uproar in the country against the Church and others supporting traditional marriage is a manifestation of an "ideological totalitarianism," GÄ.decki said, "consisting in removing people who think differently outside the sphere of freedom."

He urged lawmakers not to accede to the calls to redefine marriage, and called for "non-discrimination in public discussion" on both sides of the debate on sex and gender ideology.

This pro-LGBT "ideology," he said, would bring about the ruin of society, he said, quoting Pope Francis' November, 2014 address to the International Colloquium on the Complementarity Between Man and Woman.

Archbishop GÄ.decki quoted Pope Francis in his statement, "This revolution of customs and morals has often waved â€~the flag of freedom', but it has, in reality, brought spiritual and material devastation to countless human beings, especially the poorest and most vulnerable."