There's a black and white photo that holds a special meaning for those familiar with Blessed Stanley Rother -  the farm-raised Oklahoma priest who gave his life for the faith 38 years ago while serving the poor in Central America. 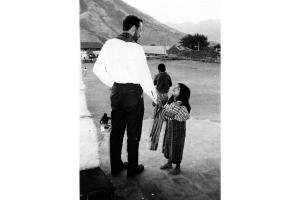 Solola, Guatemala, (CNA) - The picture shows the tall, bearded priest standing on the steps of his mission church in Guatemala, holding the hand of an indigenous girl, probably four or five years old, who is gazing up at him.

"There's actually a statue that was made based upon that photograph," Archbishop Paul Coakley of Oklahoma City told CNA.

"No one really knew who that young girl was, but in recent months she has been identified and we had a chance to meet her [on Sunday]."

Coakley led a group of 53 pilgrims, most from his diocese, on a trip to Guatemala to celebrate Father Rother's July 28 feast day in the parish where he served.

"She was there with her mother," Coakley continued. "This woman is now in her 40s, her mother must be in her 60s or 70s, but we had a chance to meet her, greet her, and that was a beautiful moment because I'm very familiar with the photograph and the image."

SANTIAGO ATITLAN -- The year before Blessed Stanley Rother was murdered in Guatemala, an iconic photograph of him holding the hand of a young girl was captured outside of... https://t.co/YsFHLAJ275

Blessed Stanley Rother was from the small town of Okarche, Oklahoma, about 40 miles northwest of Oklahoma City. He was born in 1935 and attended Holy Trinity Catholic Church and School his entire life before joining the seminary, where he struggled at first, but he eventually graduated from Mount St. Mary's Seminary in Maryland. He was ordained a priest of the Diocese of Oklahoma City and Tulsa in 1963.

While Rother was in seminary, St. John XXIII asked the Churches of North America to send assistance to and establish missions in Central America.

Soon after, the Oklahoma diocese established a mission in Santiago Atitlan, Guatemala, a poor rural community of mostly indigenous people, a group called the Tz'utujil, who are descendants of the Mayans.

A few years after he was ordained, Fr. Rother accepted an invitation to join the mission team, where he would spend the next 13 years of his life.

The group from Oklahoma City, along with a number of other pilgrims from the US, went to Guatemala last week to visit some of the places where Rother served in the 1960s and '70s, including his mission parish in Santiago Atitlan.

"We had two beautiful Masses, and the people there are very traditional in preserving their Mayan culture, Mayan dress, and they came in great crowds to the Masses that we celebrated in both Santiago Atitlan and in Cerro de Oro," he said.

A group from the archdiocese generally visits Guatemala every five years, and this was the first year the group has visited since Rother's beatification in 2017. Last year Coakley had stayed home, because he wanted to be in the archdiocese for Rother's first feast day.

"[On Monday] I met a priest who had been baptized by Father Stanley many years ago, and I think he was the first Tz'utujil priest to be ordained from the diocese," Coakley said.

"That was a quite evident fruit of Blessed Stanley's ministry. Many things are still flourishing there that he was a part of, that he helped to start. The parish is strong, many vocations have come from the parish, he developed a farming cooperative, some agricultural projects that are still going strongly."

"One of the things that really helped him connect with the people is that he took the time and made the effort to learn their language, which was a very difficult Mayan dialect," Coakley continued.

"He acquired the skill and proficiency so that he could preach in it, could speak to the people in that, and that was really some of the key to his success. That and the fact that he just loved being with them. He would work with them, he would eat with them in their homes, visit them, so it was a powerful witness that endeared him to the people and he had certainly fallen in love with the people themselves."

Blessed Rother's influence is still felt in the parish and in the town, especially since relics of the priest are kept in the church for the people to venerate.

"The love that the people of Santiago Atitlan have for Blessed Stanley is very apparent," Father Josh Mayer, a priest of the Diocese of Gallup who was also visiting Guatemala for the feast day, told CNA.

"At the parish, his presence is everywhere " his heart and his blood are in the Church, the room that he was killed in has been converted into a chapel in his honor, the parochial school has been named after him. Blessed Rother is well-known all over town."

Mayer is pastor of two parishes in the Diocese of Gallup " St. Mary in Bloomfield and St. Rose of Lima in Blanco " which have a partnership with a Guatemalan school called Escuela Integrada. Father Mayer said the vibrancy of the parish where Rother served is an inspiration to him, especially the Chapel of Perpetual Adoration, which he says is always full when he visits.

"The Catholic community in Santiago Atitlan is incredibly vibrant and active. I've never seen as many altar servers as they have at each Sunday Mass in Santiago " it's incredible," he said.

"The Eucharistic Ministers and lectors and catechists and other ministry groups are all incredibly well organized and everyone takes their roles very seriously. The people are very proud of what they do for Jesus and His Church. Every time I visit the parish of Santiago Apostol, I'm inspired with a vision of what we could do at our parishes back home."

Despite the vibrancy of the parish, Mayer reflected that Guatemala is a "land of extremes": a beautiful, rich environment populated by people notable for their kindness, warmth, and sense of community and family life. At the same time, material poverty, malnutrition, envy, extortion, and abuse are common.

"And yet, in the midst of these profound difficulties, the Guatemalan people have a profound sense of hope and joy," he said.

"Their faith, hope and love shine forth in a way that really is miraculous...there are many Catholic and Christian groups that work, in ways big and small, to help our brothers and sisters in Guatemala."

In the early morning hours of July 28, 1981, three ski-masked men broke into the rectory of the mission where Rother was living. The men were Ladinos" non-indigenous men who had been fighting the native people and rural poor of the country since the 1960s.

The men attempted to kidnap Rother at gunpoint, but he refused and resisted, struggling but refusing to call for help so as not to endanger the others in the parish mission. Within fifteen minutes, the men had shot the priest twice and fled.

"What Blessed Rother did on the night of July 28, 1981, wasn't essentially different from what he was already in the habit of doing " pouring his life out for the people that Jesus had called him to serve," Mayer reflected.

"He died well because he lived well, for God and for the flock he was given. It's a great inspiration and a deep challenge: if you want to die as a martyr, if you want to die like Jesus, don't wait for some terrible opportunity to come to you. Pour your life out, now, for God and for the people that He's put in your life, and then you will be ready if the ultimate sacrifice is demanded of you."

The Oklahoma City archdiocese opened Rother's cause for canonization in 2007.

Pope Francis recognized Rother as a martyr in 2016. He is the first martyr from the United States and the first U.S.-born priest to be beatified, the archdiocese says.

The Rite of Beatification took place Sept. 23, 2017, in downtown Oklahoma City with more than 20,000 people from around the world in attendance.

Rother is a well-known figure in the Oklahoma City archdiocese and throughout the state. Last week, Governor Kevin Stitt proclaimed July 28 Blessed Stanley Rother Day in Oklahoma. The day coincides with Rother's feast feast day, the 38th anniversary of his martyrdom.

The Archdiocese of Oklahoma City is in the final stages of design of a 2,000-seat shrine church, museum, and campus in his honor, to be located in south Oklahoma City, according to the archdiocese website.

"Blessed Stanley is really, in my estimation, kind of an everyman's saint. There's something about him that everyone can relate to," Coakley reflected.

"Family, community, parish life were all very important to him growing up, and so he embedded himself in the parish in Guatemala among the families that he served. He became a part of each family. So I think his dedication, his availability, his determination, his willingness to roll up his sleeves and work hard, he didn't take himself too seriously...He was courageous when things got difficult, he knew what he was facing but he chose to remain there and stay with his people, and that's what cost him his life" his love for his people and his love for the gospel, and his desire to be faithful to the end."