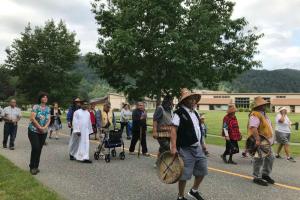 Vancouver, Canada, (CNA) - Kateri was orphaned at the age of 4, after her family died of smallpox. She was raised by her uncle and by the age of 11 vowed to pledge her virginity to Christ after hearing about him from some Jesuit missionaries.

Like many First Nations people of Canada today, Kateri sometimes faced tension between her two identities as a Christian and a Native American - she felt Christ calling her to virginity, but her family wanted to marry her off. She loved her people, but was forced to move to a Christian mission when violence in the tribe escalated and threatened her safety and virginity.

She died at the young age of 24 from tuberculosis, after a life of austerity and penance. She is buried in what is now Canada, at the St. Francis Xavier Catholic Mission in Kahnawake, just south of Montreal.

This year on her July 14 feast day, a group of First Nations people in Agassiz in the Archdiocese of Vancouver, Canada, celebrated the saint with a Mass, procession and barbeque. The event was a 'huge step' toward reconciliation with the First Nations people of Canada, Deacon Jamie Meskas told The B.C. Catholic.

'We hold the saint up, St. Kateri, and what she means to us,' Meskas added. 'She became a saint and did not leave her culture or her language behind. She became a saint in who she was, a First Nations woman, with her faith in Christ. It was the combination of the two. We honour those two together.'

According to the Canadian Encyclopedia, First Nations people are Aboriginal Canadians who are not MĂ©tis or Inuit. There are 634 different First Nations native races in Canada, which speak more than 50 different languages.

The annual event in Agassiz began with a 9 a.m. street procession on July 14, Kateri's feast day. The group of about 50 people, many of them of the Stolo First Nations community, prayed the rosary and sang traditional songs as they walked to Immaculate Conception Church for Mass. Each decade of the rosary was prayed for a specific intention of the local First Nations community.

In his homily, Archbishop J. Michael Miller remarked on God's healing power, which became visible at Kateri's death, when all of her smallpox scars disappeared.

'Minutes after her death, something absolutely astonishing occurred. The scars which marred her face disappeared, and her face became very beautiful,' Archbishop Miller said in his homily.

'While we might not bear physical scars, so many people today carry deep emotional, psychological, and even spiritual scars from the wounds they have suffered. These scars are not inflicted by smallpox, but by poverty, addiction, loneliness, and betrayal. They are caused by the cultural and sexual abuse suffered by Kateri's modern-day Indigenous sisters and brothers in their time at Canada's residential schools, many of which were run by the Catholic Church. So much pain, so many wounds, so much trauma, so many scars,' he noted.

'What we cannot bring about by ourselves and our own efforts, we can do with the grace of God. Guiding us along this path to truth, reconciliation, and transformation, from scars to healing, is surely one of St. Kateri's greatest gifts to us, perhaps even the greatest miracle that the Lord has given to the Church through her intercession,' he added.

The Agassiz event concluded with a well-attended barbeque and the gifting of a paddle, a sacred First Nations symbol, to the Archbishop.

'We bring people together and we hope it builds bridges,' Meskas told The B.C. Catholic, noting that he had heard a woman in attendance who promised to come back to Mass after many years away.

'It was a very powerful day.'

St. Kateri was also celebrated by First Nations people in Maskwacis, Canada in the Catholic Diocese of Edmonton in Alberta.

According to Grandin Media, Our Lady of Seven Sorrows Parish has celebrated St. Kateri's life for six years now with Mass and a traditional lunch of soup and bannock. Every year, children of the parish perform a play based on Kateri's life.

Wildcat, a member of Ermineskin First Nation, told Grandin that the story of St. Kateri inspires her because of how well she can relate to her.

'I experience judgment, criticism, talk because of my faith and belief in the Church as I journey in my everyday life,' she said.

'I'm very thankful that the people I work with respect my belief. But I know, in our other places, when we gather " it's not just me, I speak for other women " we have to hear things about
That's not our culture. That's not our way of life.''

'That's where Kateri comes in. We can pray to her and ask her to intercede for us to our Heavenly Father, so we can be strong. There are times I'll speak up and say 'We need to respect each other's beliefs,'' she added.

Wildcat told Grandin that she thinks some of the animosity towards the Church comes from the history of residential schools, which were state-owned by often managed by Catholics, in which indigenous children were taught over the course of roughly 100 years.

Recent accusations against the schools include a forced 'enculturation' of the children to the state through attendance at residential schools. Some 6,000 children also died in the schools. The Truth and Reconciliation Commission, which ran from 2008-2015, called for action on 94 points, one of which was an apology from the Catholic Church.

In 2009, Benedict XVI did apologize for the Church's participation in the system during a meeting with the head of the Canadian National Assembly, Phil Fontaine, showing 'his pain and anguish caused by the deplorable conduct of some members of the Church,' adding that 'acts of abuse can never be tolerated by society.'

Wildcat told Grandin that she was 'thankful that I didn't experience what others experienced (in the schools). I learned to pray and to believe in God even though throughout my life, I had a grudge against them because of things in my life growing up.'

After some time away from the Church, Wildcat again made room for God in her life, she said.

Wildcat said the yearly celebration of St. Kateri allows Catholics to spread awareness of the saint known 'for her healing and virtuous life that she lived, so we too can focus on those virtues.'