The Mexican bishops reaffirmed Tuesday its concern over the lack of a humanitarian reception for migrants, whose dignity has been violated, and exchanged for "a plate of lentils." 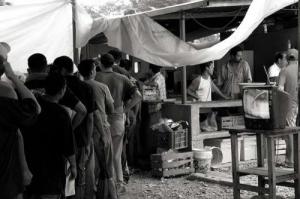 Mexico City, Mexico, (CNA) - The bishops' conference criticized Mexico's lack of migration policies in a July 23 statement, saying that as a result, the country has submitted to the policies and impositions of the United States, "accepting the incoherency of tying business interests to the right and need to migrate, seeking a better life."

"Sadly we can see that this dignity as persons and children of God is being violated, since it has been 'exchanged for a plate of lentils'", they lamented.

The bishops' conference expressed their concern "for a truly humanitarian reception for our brother migrants, which reflects our convictions concerning the recognition and equal protection of the rights of all human beings."

In June, Mexico agreed to take measures to reduce the number of migrants to the US, in order to avoid the imposition of tariffs.

Some 6,000 National Guard troops will be assigned to Mexico's southern border with Guatemala, and some asylum seekers in the US will be sent to Mexico to wait while their claims are processed.

"A wall not only protects, but isolates from the encounter of one to another; erecting them is to let us be carried away by fear and uncertainty," the bishops wrote.

"Walls are not only built with stones and bricks but also with negative attitudes such as deploying thousands of National Guard soldiers at our borders as a failed solution to curb migration; a wall does not address the roots and the true causes of the migration phenomenon," they stressed.

They therefore said that the fight against poverty and inequality in their country and in Central America would seem to "be replaced by fear of the other person, who is our brother."

Similarly, they emphasized that the Church and civil society have always stood up for "the non-criminalization of migrants and human rights defenders that are fighting against the flow for dignity and with significant risks to their own safety, even to their lives." Additionally, that the dignity and human rights of migrants are to be held "very much above any negotiations."

"The Church is convinced that a just immigration policy is necessary and urgent that on one hand guarantees an ordered, responsible and regulated free transit of people and that also looks after the legitimate interests of our nation," they said.

They also explained that "hunger, poverty, violence and the lack of opportunities" are the causes of internal and external migration, which requires the "creation of sources of employment and the reconstruction of the social fabric."

According to the bishops' conference, thousands of migrants are waiting to cross the border with the sole purpose of fleeing violence and extreme poverty.

"So many others are detained or deported to Mexico, even more under the unilateral American program 'Stay in Mexico', under which thousands of Central Americans are hoping for a resolution of their immigration status, putting an electronic bracelet on them and restricting their movement to a specific place," they said.

They also recalled that one cannot be indifferent to the suffering endured by migrants with the lack of humanitarian aid and who are "exposed to grave risks in the border towns, preventing their full and free access to legal assistance."

The Mexican bishops enumerated five main points of concern: the defense of the dignity and human rights of all migrants; migrant raids in the US with the attendant danger of family separation; the threat of massive deportations from the US to Mexico; a new migration policy in Mexico based on containment and deportation rather than welcome; and the insistence of Mexican government agencies that shelters provide information on the migrants they serve.

"The Church, as a mother and protectress is concerned for and takes care of the poor and needy, and migrants are at this time, the poorest of the poor; the collaboration of the Mexican and American bishops in charity for this sector of society expresses their desire to continue to collaborate with all the initiatives that would permit finding a way for better security and protection of human rights of those who emigrate, and they raise their prophetic voice when these rights are violated." they said.

Finally, they asked the Holy Spirit "to enlighten the civil authorities of our nations so they would make the wisest, most worthy, coherent and authentically beneficial decisions for our peoples, as well as  safeguarding the sovereignty of our nation, putting first the common good of man as a sign of human development, maturity and intelligence."