Bishop Ruben DarĂ­o Jaramillo Montoya of Buenaventura will perform blessings throughout his cathedral city Saturday, hoping to counter it's extreme violence, including kidnappings and murders. 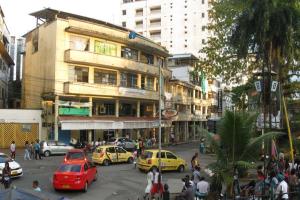 Buenaventura, Colombia, (CNA) - Buenaventura is Colombia's main port on the Pacific, and so is a key point in the international drug trade.

In recent years, Human Rights Watch has said the city's neighborhoods are controlled by "paramilitary successor groups" which engage in extortion and violence.

Bishop Jaramillo had originally shared the idea of performing a blessing on the city from a helicopter. The news has been erroneously reported by some media as an exorcism.

The Bishop of Buenaventura told ACI Prensa, CNA's Spanish language sister agency, July 10 that the blessing will be done July 13, but not from a helicopter.

"We are going to form a line of vehicles with a firetruck and a statue of Saint Bonaventure. We're going to go to all locations, to the most difficult neighborhoods where people have been killed in recent years," he explained.

The caravan and the people who will be waiting throughout the city "will form a people who are going to reinterpret those places of death so they will now be places of life," Jaramillo said.

At every place the caravan stops, the bishop will offer a prayer, there will be a hymn, and the community will gather together to hear a testimony. "We're going to pray for the victims and to then do a blessing," he said.

"Where blood flowed, where blood was shed, we are now going to pour holy water as a sign of reparation at the place where those who died were struck down by violence," the bishop stated.

Last month, the prelate told Agenzia Fides, "we've had 54 violent deaths so far this year, but there are a lot of people who have disappeared. And people don't report it. The problem is there is still not a culture of reporting because there is fear, we have a society that is afraid to report."

The bishop also denounced the existence of so-called "torture chambers" or "chop-up houses" where people who were kidnapped are tortured and killed because they got in the way of or did not support gangs and organized crime, something thought to have disappeared in 2015.