The migration ministry in the Diocese of Arica, Chile has announced an aid campaign for the hundreds of migrants facing desperate conditions at a border crossing in the northern part of the country. 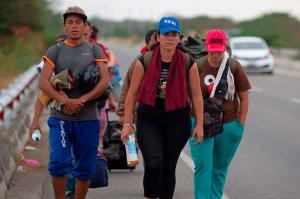 Arica, Chile, (CNA) - The diocese pledged to "redouble our efforts in this humanitarian emergency we are experiencing now."

While Catholic institutions are present along the border and are providing humanitarian aid, the Diocese of Arica said more is needed to alleviate the crisis. It encouraged donations of bottled water, diapers and wipes, fruit juice and milk. Donations are being collected at San Marcos School in Arica.

The diocese also warned that the migrants are receiving insufficient medical care and face poor sanitary conditions. It noted "an increase in respiratory illnesses because of the difference between the daytime desert heat and the nighttime cold. They have gotten sick again and again without the hope of being able to continue their journey."

Many of the migrants were turned away from entering Chile due to failure to meet stricter legal requirements that were recently enacted.

Chile recently imposed stricter controls on those entering its territory, as the number of Venezuelan emigrants swells. Facing violence, social upheaval and hyperinflation under Venezuelaâ€ s socialist government, more than 4 million people have fled the country since 2015.

Some 1.3 million Venezuelan emigrants are currently living in Colombia, and some 800,000 are in Peru.

On June 22, Chile enacted a policy requiring immigrants to have a passport and visa, proof of money to support their stay, and a hotel reservation or letter of invitation from a resident.

Last year, new residency requirements were introduced, including a temporary residency visa, valid for one year and renewable for the same period, a clean criminal record, and other identifying documents.

Peru has also moved to restrict the flow of migrants. The nation mandated June 15 that Venezuelans must have a passport and visa to enter the country; previously, only a national ID card was needed.

The Diocese of Arica argued that a solution to the crisis can only be found by addressing the complexity of the underlying issues and approaching migrants with a sense of accompaniment.

"The situation of the mostly Venezuelan migrants now held up on the Chilean border is certainly not going to be resolved by simply allowing or barring their entry," the diocese said in its statement. "That's only the first step in a complex process which requires accompaniment and solidarity."

"If a Venezuelan family succeeds in entering our country, that will be the first step in a new life from being uprooted from their country to another where there is no certainty that their basic needs and assimilation would be guaranteed," said the Vicar General of the Diocese of San Marcos in Arica, Fr. Mauricio CĂˇceres.