Cardinal Pell will not ask for shorter sentence if appeal fails

Cardinal George Pell of Sydney, who was sentenced to six years in prison in March after being convicted of five counts of sexual abuse of minors in December 2018, will not ask for a shorter sentence if his appeal fails to overturn his conviction. 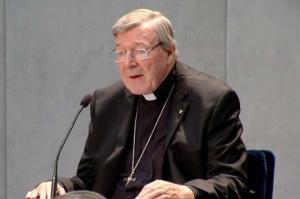 Melbourne, Australia, (CNA) - Pell must serve at least three years and eight months of the sentence. He has been jailed since February. He was convicted of one count of "sexual penetration of a child" and four counts of "committing an indecent act with or in the presence of a child."

He was specifically convicted of assaulting two choirboys in the sacristy of the Melbourne cathedral in 1996, and fondling one of the choirboys in a corridor.

News of the trial was not broadcast in Australia due to a gag order issued by Judge Peter Kidd. This gag order was lifted upon Pell's sentencing.

Pell's legal team has submitted three grounds for their appeal.

Pell and his lawyers argue that the jury could not have been convinced beyond a reasonable doubt of Pell's guilt due to the presence of "unchallenged exculpatory evidence" from 20 witnesses. Only one of Pell's victims is still alive, and the other, deceased, victim repeatedly denied prior to his death that he had ever been abused.

Pell's lawyers also say that they should have been permitted to use a video graphic during closing arguments. This graphic, they say, would have shown it was impossible for the assault to have occurred as described.

Additionally, the legal team has argued for an appeal due to the "fundamental irregularity" of Pell not being properly arraigned in front of a jury.

If the judge agrees that his guilt is not beyond a reasonable doubt, his conviction will be overturned and he will be released from prison. If the judges accept the second or third reasons for the appeal, he may have a new trial. If the judge does not accept his appeal of the verdict, Pell will not appeal his sentence, his attorneys have told Australian media.

Pell's conviction reportedly came after a first trial ended with a hung jury, with the majority reportedly voting to acquit Pell of the charges, according to sources close to the trial.

Pell has not yet faced a canonical trial for the allegations of abuse leveled against him.

Vatican spokesman Alessandro Gisotti said that he believes Pell "has the right to defend himself until the last stage of appeal."