The Mexican Bishops' Conference has made a public request for help from the country's authorities, as well as all people of good will, in addressing the migration crisis at the country's southern border. 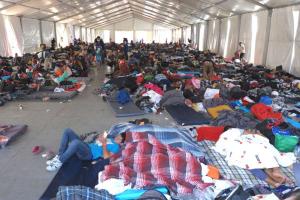 Tapachula, Mexico, (CNA) - In a May 7 statement entitled "Request for Help," the bishops noted that "we Mexicans have always been known for our joy, solidarity, treating others well and hospitality."

However, they lamented, with the recent migrant caravans, "some people have taken on attitudes of rejection, indifference, xenophobia, discrimination and racism."

Thousands of migrants have arrived in recent months at the southern border of Mexico on their way to the United States. Many come from Central American countries facing gang violence, economic crisis and environmental instability, as well as from Haiti, Cuba and African nations.

While Mexican president AndrĂ©s Manuel LĂłpez Obrador campaigned on a pledge of protecting migrants and their rights, the Mexican government has begun detaining caravans as numbers of migrants arriving in the country increased.

Mexico is currently facing a "humanitarian emergency" as migration caravans move through the country, often lacking basic shelter and necessities, the bishops warned.

They pledged "to do everything possible to be a Samaritan Church to make the journey of our brother migrants less onerous."

"We have requested Caritas National's action in organizing the aid in our country, just as we are motivating the different dioceses in our homeland to raise up an additional effort of generosity among our parishioners on behalf of our brothers," they said.

The bishops particularly noted concern over the situation on the southern Mexican border, "specifically what the city of Tapachula is experiencing in Chiapas." They said that the vast number of migrants has outpaced aid from the Church and government.

With the migrant assistance station overburdened, the migrants now wander the streets in search of help, they said.

"At the door of the southern border there are thousands of our brothers, people who have already gone several days without eating and who are sleeping in the streets. There are children, elderly people, the sick, some women close to going into labor."

The bishops of Mexico called on the federal government to activate an emergency plan and request humanitarian assistance for those in need, particularly in Tapachula. They also asked for clarification regarding the legal situation of those seeking to pass through the country.

"We urge adequately addressing this moment of crisis in which our country has the opportunity to show its true level of humanity," the bishops said. "As a Church we offer our prayer, all our support and help."