More than twenty journalists in Australia faced court charges Monday over breach of a court gag order in the case of Cardinal George Pell. The state government of Victoria is bringing charges against several prominent individuals and news outlets for tacitly supporting overseas media in flouting the news blackout. 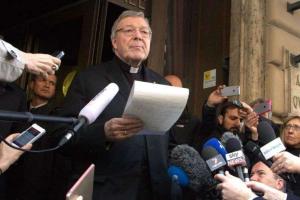 Melbourne, Australia, (CNA) - On April 15, Victoria County Court held a first hearing in an effort by state prosecutors to bring charges against 23 journalists and 13 news outlets, including some of the largest names in Australian media, including The Age newspaper and several News Corp publications.

Shortly after the Pell verdict was reached, Judge Peter Kidd issued a pointed warning about media violations of reporting restrictions.

"A number of very important people in the media are facing, if found guilty, the prospect of imprisonment and indeed substantial imprisonment, and it may well be that many significant members of the media community are in that potential position," Kidd said on December 13.

Victoria has faced sustained criticism for the use of suppression orders by the state's courts.

Despite an Open Courts Act passed in 2013 aimed at improving judicial transparency, Victorian courts issued more than 1500 suppression orders between 2014-2016.

Cardinal Pell was convicted of sexual abuse of minors on 11 December last year. Media coverage of the trial was forbidden after the County Court of Victoria imposed a sweeping injunction suppressing the legal proceedings in June, 2018, at the request of the prosecution.

The court order sought to prevent reporting of Pell's December conviction, pending a second trial due to begin in early 2019. The ban was lifted in February, after prosecutors dropped the remaining charges.

Several international outlets, including CNA, carried news of the trial and verdict, in some cases blocking that coverage from appearing online in Australia in order to comply with court order.

Domestic media in Australia mostly complied with the court order, though some media outlets reported that an unnamed high-profile individual had been convicted on unreportable charges.

The Herald Sun newspaper ran a December 12 cover story under the headline "CENSORED" which said that "the world is reading a very important story that is relevant to Victorians."

"The Herald Sun is prevented from publishing details of this significant news," the front page read. "But trust us, it is a story you deserve to read."

Coverage like that, according to Victoria prosecutors, amounted to offering support to overseas outlets in contempt of court. Penalties can include five years in prison and fines of up to A$100,000 ($71,000) for individuals, and nearly A$500,000 for companies.

Steven Butler, an official of the Washington-based Committee to Protect Journalists, to Reuters that court ordered media gags in the digital age are "futile in a case of global interest."

"We urge Australian authorities to drop these proceedings and to re-examine the application of such suppression orders," he said.

In December, one source close to Pell told CNA that the cardinal's treatment during his trial had been "Kafka-esque," with the gaga order allowing an original hung jury, which deadlocked 10-2 in Pell's favor, to be suppressed while an expedited retrial secured a conviction in a matter of weeks.

"Prosecutors can retry him - in secret - until they get a conviction, but there can't be any discussion of what he's accused of, no scrutiny of the evidence against him, and no questioning the verdict. On what planet is this justice?"