The Plaza de Mayo, the large square in front of Argentina's Casa de Gobierno " the seat of the national government " is filled with university students and teachers who sit or stand before improvised desks and blackboards. 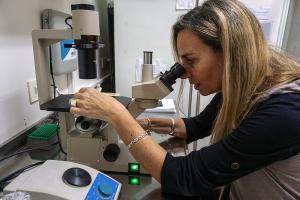 Teresa Politi, a doctoral student in cardiology and one of the protesters in the plaza, tells another researcher at the protest that she keeps track of how much her salary and academic grant, given in Argentine pesos, are worth in dollars, so that she can explain to scientific journals that she can't afford to pay the publishing fees they require.

The researcher responds with a similar story: Every time a publisher asks him to write a paper or a chapter for a book, he immediately tells the publisher that he doesn't have any money for publishing fees.

Politi explains that there's no money in her research program's budget to pay for internet at work or to participate in conferences. All that comes out of her own pocket, she says.

"Now everyone tells me that I was born in the wrong country for research. It makes me angry that, with everything that is going on, I don't have reason to tell them they are wrong," she says.

There's a serious lack of money for researchers in Argentina in general (read our coverage of this issue here), but one aspect of the budget crunch that particularly worries those academics is that they can't afford to publish their work in paid scientific journals. Without that publication, their research holds a tiny fraction of its potential impact, they say. And without that impact, the researchers are not nearly as likely to get the top international grants that could make more of their work possible, they say.

It's difficult to pin down exact details of how the Argentine government spends money, but the science budget has been substantially trimmed, and that was before new austerity measures took effect in recent months, analysts say.

The 2018 budget for science and technology is nearly $35 billion pesos (about $1 billion). That's about 1.2 percent of Argentina's total budget. For researchers in science fields, that trimmed budget means they're even less likely to be able to pay to publish their work.

Indexed scientific journals " ones that appear in a database with international reach " charge authors between $800 and $5,000 (between 28,385 and 177,408 pesos). Those fees come at the end of long, expensive research processes. Most researchers pay for their own supplies in dollars, while their grants are paid in pesos that consistently lose value.

The maximum grant amount given by the Agencia Nacional de PromociĂłn CientĂ­fica y TecnolĂłgica " the government's agency for the promotion of science and technology " is 460,000 pesos per year (about $13,000, as of early November), says Claudia Capurro, a principal investigator at the Consejo Nacional de Investigaciones CientĂ­ficas y TĂ©cnicas, the national council of scientific and technical research.

Capurro's organization, the Instituto de FisiologĂ­a y BiofĂ­sica Bernardo Houssay, a physiology and biophysics research institution, won a grant in 2016, she says. The grant is scheduled to end in 2019.

Capurro is a specialist in cardiovascular health. Her research is best suited for paid scientific journals, she says, but even with her organization's grant, she usually ends up submitting it to whichever publication won't charge her a fee. Those publications, she says, are usually less than ideal.

"We can't afford the publishing costs," she says. "We prioritize using the little there is of the grant on supplies."

Argentina is not among the more than 100 countries that receive fee waivers or reductions from PLOS, a group of major scientific journals, but an assistance program is offered to individual researchers and scientists who demonstrate need. A representative from that organization told Global Press Journal that the publication cannot provide any information about how it determines fee waivers or reductions.

Viviana Martinovich, executive editor of Salud Colectiva, a free scientific journal that appears in international databases and is based in Argentina, says the solution is not to increase grant funding, but for the publishing sector to create free journals.

Argentina is home to many scientific journals, Martinovich says, but most of them are not indexed. Only articles published in indexed journals contribute to a researcher's h-index, a globally recognized rating system that notes the number of an author's published works and whether those works were cited by others.

"Getting a journal to be indexed is very expensive in terms of time and work," Martinovich says, adding that approval can take up to a year.

Most publishers fail in their efforts to get a journal indexed, she says, because of the high bar set for the indexing process.

This type of discouragement is common for people working in the sciences in Argentina. It's not the first time the sector has faced serious challenges. With the country's ongoing economic challenges, and a long history of brain drain as academics and other types of experts look for better options elsewhere, Martinovich is convinced that the best solutions must be home-grown.

"It is not the first time that there is a crisis nor that the system of science and technology goes through a bad period," she says. "It is difficult to plan long-term projects like maintaining and indexing a journal, in this context."