The violence that is endemic in central Chiapas, the mountainous state at Mexico's southern edge, seemed to peak in October 2017. 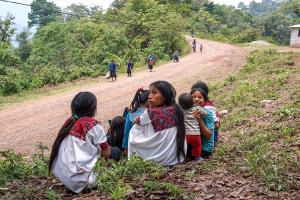 That's when armed groups pushed about 5,000 Tsotsil people from their villages and into makeshift shelters in a camp known as Xiximtontic.

But instead of subsiding, the violence surged on. Throughout 2018, attacks on indigenous Tsotsil villages continued, forcing people out of their homes.

This map shows locations from where more than 5,000 people were forced from their homes in October of 2017. They sought refuge at a makeshift camp, where about 100 people still live today.

The attacks, which have happened seemingly at random for decades, are perpetrated by armed groups thought by many researchers to be state-supported paramilitaries.

This section of Mexico is where the Zapatistas, an armed group of mostly indigenous people, declared war on the Mexican government in 1994.

Hundreds of people died in the initial uprising, but violence continued even after a tenuous peace was reached in 1996. It's widely believed that the Mexican government has armed or currently arms " or at least turns a blind eye toward " the groups that attack Tsotsil communities throughout the region, in an effort to stamp out the vestiges of the Zapatista movement. The dynamic is further complicated by the fact that the attackers often appear to be Tsotsil themselves, according to interviews conducted by Global Press Journal with people who were displaced.

These days, attacks happen more frequently, according to reports collected by Global Press Journal from Fray BartolomĂ© de las Casas Center for Human Rights, a Chiapas-based nonprofit that monitors human rights violations, as well as from the United Nations and other local sources.On Feb. 27, an armed group from Manuel Utrilla Santa Martha, in Chiapas's Chenalho municipality, attacked nine communities along a contested riverbed in the nearby municipality of Aldama. Some of these same communities were attacked again on Oct. 19.

On Nov. 7, there was an attack in Chabajebal, in the El Bosque municipality, that led to the displacement of 1,764 people. That village is 4 miles (6.4 kilometers) from the Xiximtontic camp, where about 5,000 people took refuge in October of 2017.A handful of villages along a river were targets of attacks by armed groups in 2018, including a string of attacks in February. Dark red markers indicate attacks that occurred in November. The black marker shows the community where the armed group resides. The white market shows Oventic, one of the few communities under Zapatista control.

On the same day, about 6 miles (9.7 kilometers) south of Chabajebal, an armed group attacked the community of Xuxch' en in the Aldama municipality. The armed group shot at people who were on their way to harvest coffee. A dozen families fled to the mountains.

The attacks echo a tragedy that occurred more than 20 years ago but is still part of everyday conversation here. In 1997, 45 unarmed people were murdered in the village of Acteal by an armed group supported by local governmental officials and thought by some local people and researchers to be a state-sponsored paramilitary that sought to kill suspected supporters of the Zapatistas and other groups.

Media reports tend to focus on the Zapatista presence in the region and connect the violence to that movement, but people who live there say that's not always the case. Sometimes, the violence is about local land disputes. In one attack, the gunmen claimed to hold land titles in their favor dating back to the 1940s.Government development projects have led to deadly land disputes in the past. Now, local people worry that the promised Mayan Train, a 1,500-kilometer (932-mile) railroad planned to carry tourists during the day and cargo at night, might trigger more violence.

Construction for the Mayan Train project was scheduled to begin in the second half of December 2018.Members of an armed group were arrested in the locations shown above for participating in the 1997 Acteal massacre, where 45 unarmed people were killed.

In the string of attacks in the Aldama area, the root cause lies, at least in part, in land allocations decided by the national government in the 1970s. One particularly contentious decision gave the indigenous community of Chenalho 60 hectares (about 148 acres) of land along a riverbed " land that was previously owned by 115 people from Aldama.

Many of the attacks occur during the coffee harvest season, with shots fired at farmers as they walk to their fields. By making it dangerous to work in the fields " agriculture is the primarily livelihood for many of the people who were displaced " armed groups ensure that those people are less likely to return to their homes.Tension in the region could continue through the end of this year and into early 2019, when January will mark the 25th anniversary of the Zapatista uprising.

One of at least two celebrations to mark the anniversary is scheduled during the last days of the year in the town of Guadalupe Tepeyac, 24 miles (38.6 kilometers) from the Xiximtontic camp, where about 100 people still live.