The Nicaraguan government and opposition groups agreed Friday to a truce during talks mediated by the Nicaraguan bishops, after nearly two months of protests that have left 170 dead. 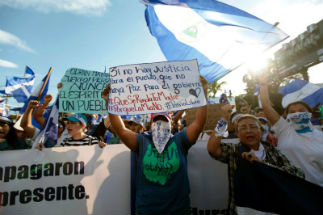 The bishops of Nicaragua reconvened a national dialogue June 15 to make known the response of president Daniel Ortega to the proposals he was given in order to end the crisis. The talks (which began May 16) had been suspended May 23 for lack of consensus.

A 24-hour general strike had closed many businesses June 14, though some violent clashes were reported. Bishop Silvio JosĂ© BĂˇez Ortega, Auxiliary Bishop of Managua, said a 15-year-old altar boy had been shot and killed by security forces.

Protests began April 18 after Ortega announced social security and pension reforms. The changes were soon abandoned in the face of widespread, vocal opposition, but protests only intensified after more than 40 protestors were killed by security forces initially.

The Church in Nicaragua was quick to acknowledge the protestors' complaints. Barricades and roadblocks are now found throughout the country, and clashes frequently turn lethal.

The ceasefire agreement calls for the establishment of a truth commission, the presence of international observers from several groups, and the removal of roadblocks.

The truth and security commission is to "verify if an atmosphere of peace and security exists for all Nicaraguans," according to a communique from the National Dialogue, and to investigate all deaths and violence, and to identify those responsible.

The communique added that "process of the the democratization of the country, which includes the agenda items presented to the President of the Republic by the Bishops' Conference on June 7" will be among the conditions of continuing dialogue.

Their June 7 statement had said that dialogue could not resume while Nicaraguans continue to be denied the right to demonstrate freely and are "repressed and assassinated."

Despite the signing of the ceasefire, a family of at least six died in an arson attack on their home and business in Managua June 16. Opposition groups have said a pro-government militia was responsible for the blaze, a charge the government has denied.

Two more people in Managua were killed the same day in incidents "attributed to masked pro-government groups backed up by armed police," the BBC reported.

Bishops and priests across Nicaragua have worked to separate protestors and security forces, and have been threatened and shot.

The Nicaraguan government has suggested that protestors are killing their own supporters so as to destabilize Ortega's administration.

Ortega has shown resistance to calls for elections to be held early. His term is scheduled to end in 2021.

He was a leader in the Sandinista National Liberation Front, which had ousted the Somoza dictatorship in 1979 and fought US-backed right-wing counterrevolutionaries during the 1980s. Ortega was also leader of Nicaragua from 1979 to 1990.