A retired bishop from Brazil has spoken out against the claim that married priests are necessary in the Amazon region because the indigenous people do not understand celibacy. 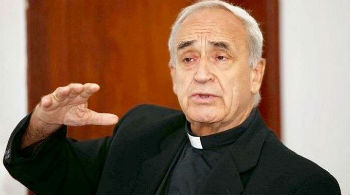 Breves, Brazil, (CNA) - A retired bishop from Brazil has spoken out against the claim that married priests are necessary in the Amazon region because the indigenous people do not understand celibacy.

"It's not the indigenous culture that finds insurmountable difficulties in understanding celibacy. It's that there was not a real inculturation of the Gospel among them," said Bishop emeritus Jose Luis Azcona of Marajo, Brazil.

Therefore, he said, "the first step in solving the problem of celibacy is not the abolition of it" but to work toward a more authentic incultration of the Gospel.

In an article sent to ACI Digital, CNA's Portuguese language sister agency, Azcona commented on the Synod of Bishops on the Amazon, an Oct. 6-27 meeting on the Church's life and ministry in the region.

Bishop Erwin Krautler, the retired head of the Xingu prelature in Amazonian Brazil and a contributor to the synod's working document, said last week that married priests are the only option in the region because "the indigenous people do not understand celibacy."

Azcona, who led the Amazonian diocese from 1987-2016, rejected this argument, noting that cultures throughout history have had to learn truths about sexuality and celibacy, and saying this learning process does not post "an insurmountable hindrance."

The Greeks, Romans, and Jews, he said, "all had the same difficulty in understanding, but at the same time they experienced the unbridled joy of 'glorifying Christ in their bodies.'"

"It's not an indigenous world-vision that determines evangelization and establishes what can or cannot be accepted of the Gospel of Jesus Christ," he stressed. Doing so would create a pseudo-Gospel, based not on the person of Christ and on his Church, but instead "arising from the indigenous, from their cultures or from their analysis."

"The evangelization of the Amazon cannot arise from the desire to please men, or to win their favor," he stressed.

"It's Jesus Christ and his Spirit that transcends all culture, but at the same time he is incarnated in the values and deepest expressions of each culture. He is the beginning, the middle and the end of all inculturation."

The bishop argued that elements of the synod's working document reflect a secular worldview and lacks the joy and hope that come from authentic Christian witness. He added that celibacy in the priesthood allows for an undivided focus on the work of God.

Abandonment to the will of God will create the environment in which priestly celibacy can be joyfully understood and experienced, Azcona said.

"It is exclusively God who gives the gift of celibacy. Man is incapable of achieving it with his own efforts," he said.

Rather than abandoning celibacy, the bishop urged the Church to renew its prayers to Christ for strength to carry out his will.

"The time has come to reaffirm in the Amazon the importance of prayer in face of the activism and secularism that threatens many Christians in evangelization."