Missionary: Married priests in Amazon wouldn't get to the root of the problem

A South American missionary to Angola who is participating in the Amazon Synod at the invitation of the pope has said the proposal to ordain as priests married men to solve the lack of evangelization in the Amazon is "illusory". 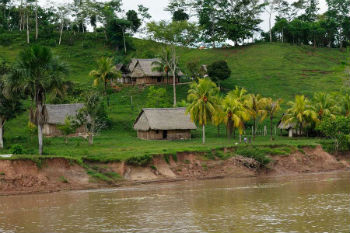 Vatican City, (CNA) - A South American missionary to Angola who is participating in the Amazon Synod at the invitation of the pope has said the proposal to ordain as priests married men to solve the lack of evangelization in the Amazon is "illusory".

"Is the lack of vocations to the priesthood and religious life in the Amazon a pastoral challenge, or rather is it the consequence of theological-pastoral options that have not yielded the expected or partial results? In my opinion, the proposal of 'viri probati' as a solution to evangelization is an illusory proposal, almost magical, which does not address the real underlying problem," Fr. MartĂ­n Lasarte Topolanski, a Salesian priest, said in a text published by Sandro Magister Oct. 12 in his Settimo Cielo column at L'Espresso.

The Uruguayan priest and missionary in Angola is responsible for missionary efforts in Africa and Latin America for the Salesian congregation. Pope Francis included him among the 33 ecclesiastics he personally called to participate in the Synod on the Amazon.

The text published by Magister is a summary of Fr. Lasarte's Aug. 12 article "Amazonia: Are 'viri probati' a solution?" published in Settimana News.

In his text, the missionary pointed out that the argument that ordaining married men as priests because it is hard to reach remote communities with the ministry "commits the sin of major  clericalism" because it sets aside the work of lay people, believing that the Church where "the 'priest' is not there doesn't function. That's an ecclesiological and pastoral aberration. Our faith, being a Christian, is rooted in baptism, not in priestly ordination," he said.

As examples he gave Korea, Japan, Angola, and Guatemala, where the laity were essential.

He noted  that the Church in Korea got its start thanks to layman Yi Seung-hun, who was baptized in China and baptized other Catholics. "For 51 years (1784-1835) since its foundation the Church in Korea was evangelized by lay people, with the occasional presence of some priest. This Catholic community flourished and expanded enormously despite the terrible persecutions, thanks to the leadership of the baptized," Lasarte said.

In the case of Japan, after the martyrdom of the last priest in 1644, priests did not return until 200 years later, finding "a living Church" made up of "hidden Christians."

Regarding his 25 years of experience in Angola, the priest said that "when the civil war was over in 2002, I had the possibility of visiting Christian communities, which for 30 years did not have the Eucharist, nor did they see a priest, but they were strong  in faith and were dynamic communities guided by the 'catechist,' an essential ministry in Africa (...) A living Church, laity with the absence of priests."

In Latin America he gave as an example "the Quetchi from central Guatemala (Verapaz), where despite the absence of priests in some communities the lay ministers also had living communities" where the evangelicals "were little able to penetrate." He said that despite the shortage of priests "it is a local Church rich in indigenous priestly vocations" and "men and women religious congregations of totally indigenous origin."

In that regard, he noted that in his apostolic exhortation Evangelii gaudium, Pope Francis pointed out that the shortage of vocations to the priesthood and the consecrated life is often "due to the absence of contagious apostolic fervor in communities which lack enthusiasm and thus fail to attract."

"The Holy Father gives the key to the problem. It's not the lack of vocations but the poor proposal, the lack of apostolic fervor, the lack of fraternity and prayer; the lack of serious and profound processes of evangelization," the Salesian priest said.

Thus with regard to the question why after 200 to 400 years of evangelization vocations are lacking in the Amazon, the priest said that "one of the pastoral problems in various parts of Latin America, and in particular in Amazonia, is the insistence on the 'old ways'. There is a great conservatism in various churches and ecclesial structures, I'm not referring just to pre-conciliar traditionalists, but to pastoral lines, mentalities, that remain stuck  in '68 and in the 1970-1980 decade," Lasarte pointed out.

The Salesian priest indicated three kinds of "Alzheimer pastoral ministry" which affect evangelization in the Amazon.

The first is "cultural anthopologism," which originated after the 1971 Barbados Declaration, put together by 12 anthropologists, which "claimed that the Good News of Jesus is bad news for the indigenous peoples."

Although "from this provocation emerged in various places a fruitful dialogue between anthropologists and missionaries, which served mutual enrichment," in other places "it fell into a self-censorship, losing 'the joy of evangelizing," with "cases of religious that decided to not announce Jesus Christ, or give catechesis 'out of respect for the indigenous culture,'" and that "they would limit themselves to witness and service" claiming that this "substitutes for the proclamation."

The missionary recalled that in Evangelii nuntiandi Saint Paul VI said that "the Good News proclaimed by the witness of life sooner or later has to be proclaimed by the word of life. There is no true evangelization if the name, the teaching, the life, the promises, the kingdom and the mystery of Jesus of Nazareth, the Son of God are not proclaimed."

Fr. Lasarte said that the second kind of "Alzheimer pastoral ministry" is "social moralism." "In more than one place I have heard similar expressions from pastoral workers: 'When people require services they come to us (the Catholic Church), but when they are looking for meaning to their lives, they go to others (evangelicals, etc.)'  It is evident and observable that the church that wants to be a 'Samaritan Church' has forgotten to be  a 'Magdelene Church', a Church providing services that doesn't announce the joy of the Resurrection of the Lord," he pointed out.

The missionary reaffirmed that the social commitment of the Church and the option for the poorest continues to be "a constitutive aspect of the evangelizing process" and a richness; but "the problem is when this kind of activity has absorbed the rest of the life and dynamism of the Church, leaving in the shadows, silencing, or taking for granted the other dimensions: kerygmatic, catechetical, liturgical, koinonia. We are in an unresolved tension of Martha and Mary."

He said that the "great hemorrhaging" of Catholics toward evangelical communities has to do with several factors, certainly "the lack of a much 'more religious' pastoral ministry and a 'less sociologized' one has had a very great influence".

"I visited a diocese where at the beginning of the 1980's, 95% of the population was Catholic, today they are 20%. I remember the comment of one of the European missionaries that systematically had 'de-evangelized' the region: 'We do not foster superstition but human dignity'...I think that says everything," he said. "The Church is some places has been transformed into a grand manager of services (healthcare, educational, development, advocacy...) but little as a mother of the faith."

Finally there is secularism. He said, "a church secularizes when its pastoral workers interiorize dynamics from a secularized mentality: the absence or a very timid, almost apologizing, manifestation of the faith."

He said that the consequences "are reflected in vocational sterility or the lack of perseverance in the path undertaken, because of a lack of deep motivations," since "no one leaves everything to be a social director, no one dedicates his existence to an 'opinion,' no one offers what is absolute in his life for what is relative, but only to the Absolute which is God."

"When this theological, religious dimension is not evident, patent, and alive in the mission, there will never exist options for evangelical radicalness, which is an indicator that the evangelization touched the soul of a Christian community," he pointed out.

To conclude his article, Lasarte said that a Christian community that "does not generate priestly and religious vocations, is a community carrying some kind of spiritual disease. We can ordain the 'viri probati, the honeste mulieribus, the pueribus bonum, but the underlying problems will remain: an evangelization without the Gospel, a Christianity without Christ, a spirituality without the Holy Spirit."

"Logically in a horizontal vision of the dominant culture, where God is absent or reduced to a few symbolic, cultural or moral concepts, it's impossible to come to appreciate the fruitful spiritual and pastoral value of priestly celibacy as a precious gift from God and of a total and sublime disposition of love and service to the Church and to humanity."

The Salesian missionary said that "there will only be able to be authentic priestly vocations when an authentic, demanding, free and personal relationship is established with the person of Jesus Christ. Perhaps this may be simplistic, but the way I see things, the 'new path' for the evangelization of Amazonia is the novelty of Christ."