Burundi official calls for laicization of bishops over election message

Government officials in Burundi have accused the country's bishops of spreading hatred and division following a message from the bishops warning of violence and corruption in the country's election preparations. 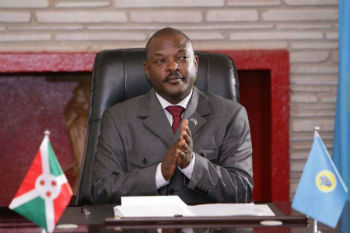 Gitega, Burundi, (CNA) - Government officials in Burundi have accused the country's bishops of spreading hatred and division following a message from the bishops warning of violence and corruption in the country's election preparations.

According to AFP, the Catholic Bishops Conference of Burundi released a letter voicing concern over efforts to "suffocate" certain political parties ahead of the May 20 presidential election.

The letter, which was read in churches over the weekend, warned that "[c]riminal acts go as far as murders with political motives ... perpetuated against those with different opinions of the government," AFP reported.

The bishops also warned that the Imbonerakure - the youth wing of the ruling party - had replaced security forces in the country. UN investigators have accused the Imbonerakure of widespread human rights abuses, including murder, rape, torture, and arbitrary detainment against political opponents.

In response to the letter, Evariste Ndayishimiye, secretary-general of the ruling party, accused the bishops of "sowing division" and "spread[ing] hatred."

"Some bishops should be defrocked because it is becoming a habit: on the eve of elections they spit their venomous hatred through incendiary messages," said presidential spokesman Willy Nyamitwe on Twitter.

A United Nations report earlier this year warned that the 2020 elections in Burundi "pose a major risk" for atrocity crimes. It pointed to red flags including increasing government control, a lack of a true multi-party system, suppression of free press, and a climate of intimidation against those who oppose the ruling CNDD-FDD party.

Burundi's last presidential election, held in 2015, was marred by protests, an attempted coup, and grenade attacks, with much of the unrest sparked by anger over Nkurunziza's decision to seek a third term, which the opposition said was unconstitutional.

Some 1,200 people were believed to have been killed in the violence that followed the election, and over 400,000 people were displaced from their homes, AFP reports.

In 2018, voters approved a new constitution allowing Nkurunziza to run for two more seven-year terms. However, Nkurunziza said last year that he would not seek re-election. Still, concerns remain high, with the United Nations calling for vigilance in the months leading up to the election.

Poverty in Burundi is widespread, with the majority of the population facing food shortages.