In his opening speech in Mozambique Thursday, Pope Francis encouraged the country's authorities to work diligently for peace. 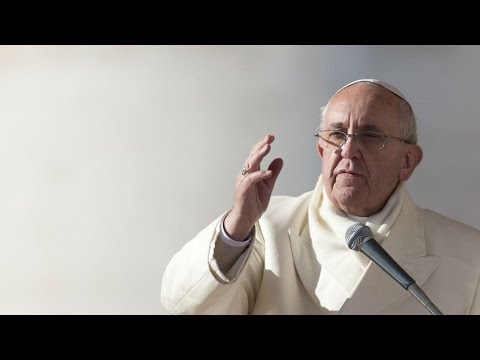 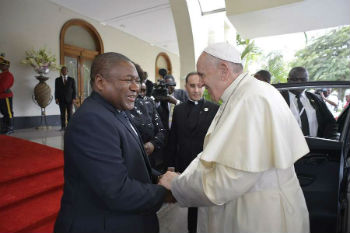 "Peace is not merely absence of war but a tireless commitment - especially on the part of those of us charged with greater responsibility - to recognize, protect and concretely restore the dignity, so often overlooked or ignored, of our brothers and sisters, so that they can see themselves as the principal protagonists of the destiny of their nation," he said Sept. 5 at the  PalĂˇcio da Ponta Vermelha in Maputo, addressing authorities, civil society, and the diplomatic corps.

The pope expressed his own gratitude "and that of the larger international community, for the efforts made in recent decades to ensure that peace is once more the norm, and reconciliation the best path to confront the difficulties and challenges that you face as a nation."

Mozambique fought a civil war from 1977 to 1992 between Frelimo, a socialist party that has ruled the country since it gained independence in 1975, and Renamo, an anti-communist organization.

Renamo began a new insurgency in 2013; this conflict came to an end only one month ago, with the signing of a peace agreement in Serra da Gorongosa.

Pope Francis welcomed this new agreement as "a landmark that we greet with the hope that it will prove decisive and a further courageous step on the path of peace that began with the General Peace Agreement of 1992 in Rome."

The pope said that the 1992 peace accords have "gradually begun to bear fruit," sustaining "hope and the determination to make your future not one of conflict, but of the acknowledgement that you are all brothers and sisters, sons and daughters of a single land, stewards with a shared destiny. Courage brings peace! Genuine courage: not the courage of brute force and violence, but one expressed concretely in the tireless pursuit of the common good."

He said Mozambicans "have experienced suffering, sorrow and affliction, but you have refused to let human relationships be governed by vengeance or repression, or to allow hatred and violence to have the final word."

Francis stated, "you have come to realize how the pursuit of lasting peace - a mission incumbent upon all - calls for strenuous, constant and unremitting effort ... it demands that we continue, with determination but without fanaticism, with courage but without exaltation, with tenacity but in an intelligent way, to promote peace and reconciliation, not the violence that brings only destruction."

He said that peace in Mozambique has allowed "promising advances" in education and health care, adding: "I encourage you to continue your efforts to build up the structures and institutions needed to ensure that no one feels abandoned, especially the young."

Youths "have the potential to sow the seeds for the growth of that social harmony desired by all" the pope said.

Francis urged a "culture of encounter," saying, "it is essential to cherish memory as a path opening up towards the future, as a journey leading to the attainment of common goals, shared values and ideas that can help to overcome narrow corporative or partisan interests. In this way, the true wealth of your nation can be found in the service of others, especially the poor."

He encouraged further work in education, provision of housing, employment, and distribution of land for cultivation.

Francis also noted the importance of care for the land, which he said "is also the protection of life, which demands particular attention whenever we see a tendency towards pillaging and exfoliation driven by a greed generally not cultivated even by the inhabitants of these lands, nor motivated by the common good of your people. A culture of peace implies a productive, sustainable and inclusive development, where all Mozambicans can feel that this land is theirs."

The pope arrived in Mozambique Sept. 4; he will remain there before going to Madagascar the afternoon of Sept. 6, and Mauritius Sept. 9. He returns to Rome Sept. 10.

During his speech to authorities, he thanked the country for its warm welcome and expressed sympathy for the people suffering from cyclones Idai and Kenneth, which struck the country in March and April.

"Sadly, I will not be able to go personally to visit you, but I want you to know of my own participation in your anguish and suffering, and the commitment of the Catholic community to respond to this most difficult situation," he said.

"Amid the catastrophe and desolation, I pray that, in God's providence, constant concern will be shown by all those civil and social groups who make people their priority and are in a position to promote the necessary rebuilding."

Pope Francis closed his address by recalling to the authorities that they are "meant to help create a magnificent work of art: the dawn of peace and reconciliation which can safeguard the right of your sons and daughters to the future. It is my prayer that, in this time that I will spend with you, I too, in communion with my brother bishops and the Catholic Church in this land, can help make peace, reconciliation and hope reign definitively in your midst."