In war-torn South Sudan, two Spanish priests build a shrine to Our Lady of the Rosary

Ave Maria, the parish church outside Mupoi, South Sudan, fell into disrepair decades ago. It was abandoned at the beginning of Sudan's civil war, and then ransacked. It is dilapidated and practically unusable. 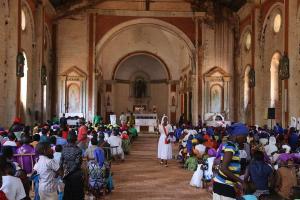 Keywords: war-torn, South Sudan, Our Lady of the Rosary

Juba, South Sudan, (CNA) - But two strong-willed Spanish missionaries in South Sudan are working to change that. They have a vision for the church, which they hope to turn in a continental Marian Shrine of Our Lady of the Rosary.

The church, near Mupoi, in the South Sudanese diocese of Tombura-Yambio, is massive. It was built almost a century ago by Combonian missionaries from Italy.

The missionaries are followers of St. Daniel Comboni, the first Bishop of Sudan, who founded their order in the late 19th century. The Combonians became the leading evangelizing force of Sudan, and were especially successful in converting to Catholicism the tribes in the territory that today comprises the new nation of South Sudan.

Sudan became an independent nation in 1956. Its first prime minister, Ismail al-Azhari, in order to appease the Islamists of the country's north, expelled all Catholic missionaries from the country. The majority of those missionaries were Italian Combonians.

Their churches, rectories and missions were either abandoned or transferred to young native clergy and religious. Ave Maria was one such Church. But after the missionaries were expelled, and the civil war began, most of the region's Catholic population fled. The Church building was left to crumble.

But Catholics are returning to the area. And two Catalonian priests, themselves missionaries to the region, are determined to turn the massive Catholic church into the continental Marian Shrine of Our Lady of the Rosary.

"Now that the people has returned to this area, our goal is to rebuild physically, but most importantly spiritually, with a comprehensive vision" says Fr. Avelino Bassols, pastor of the mission parish.

Bassols and his vicar, Fr. Albert Salvans, belong to the Missionary Community of St. Paul de the Apostle (MCSPA) made up of men and women, priests and lay people, who have decided to leave everything behind  in order to follow Christ as missionaries in the most demanding areas of the globe.

The MCSPA was founded by the Spanish missionary priest Francisco Andreo GarcĂ­a, who died of cancer in 2013 at Nariokotome Mission, in Turkana, Kenya.

Garcia moved to Kenya in 1988. After that, each time he visited Spain, he strengthened his relationships with the young people from the parishes where he had served during his years in Spain. This group later became the seed of the MCSPA, which now includes members not only from Spain but also from Kenya, Ethiopia, Germany, Malaysia, Italy, Mexico and Colombia.

Ave Maria Parish is now the epicenter of the peace and rebuilding effort in the northern part of war-ravaged South Sudan's Diocese of Tombura-Yambio.

"Our mission here is to bring the Gospel in full, and that means not only spreading the Gospel, but also bringing education, peace and reconciliation to the region," the Bishop of Tombura-Yambio, Eduardo Hiiboro Kussala, told CNA.

While the priests work in the slow rebuilding of the shrine, a building for a secondary school has been started with financial help from the U.S. based Sudan Relief Fund. The Catholic school will cater to all the students from the nearby towns of Yubu, Ngpotoneyo, Nboko and Sabamile.

"Many African Catholics come in pilgrimage to the shrine of the Holy Cross in nearby Mupoi," explains Fr. Bassols, "Bishop Eduardo has proposed to connect both shrines, thus, people can come to pray to Our Lord in Mupoi and to Our Lady here."

Fr. Bassols does not hide his enthusiasm when he explains: "We are located at the very heart of Africa. If you draw a cross from North to South and from East to West in an African map., Ave Maria is almost at the exact center."

"In the state of Tombura, 84% of the population is Catholic, and I mean, truly Catholic. We need schools, drinking water, a healthcare facility, issues we are addressing with the help of the Sudan Relief Fund. But what we have in abundance here is a deep faith. Our people have survived persecutions, the expulsion of the missionaries, many decades without priests... but their deep faith remains," Fr. Bassols told CNA.

"Is wonderful to devote one's life to the people that need, the most and to preach them the Gospel. Catholics, especially the young, should remember that our baptismal call to be missionaries is not only fulfilled by being evangelizers to  our neighbors, but also to respond to Jesus' call to 'go to all the nations' and therefore, become missionaries Ad Gentes... we invite young people to seriously consider becoming missionaries here," Fr. Salvans added.

Bassols and Salvans are hopeful that in 2023, the centenary of the foundation of Ave Maria, the shrine of Our Lady of the Rosary will be completely restored, and will attract Catholics from all over the world.