In the wake of President Cyril Ramaphosa's successful reelection bid last week, South Africa's Catholic bishops are applauding the country's efforts to hold a free and fair election, but have also issued stern expectations for the new government. 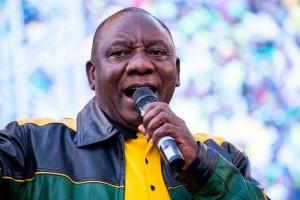 Johannesburg, South Africa, (CNA) - "We congratulate the Independent Electoral Commission and all political parties for creating a conducive environment for [a] free and fair election," the bishops wrote in a May 13 statement signed by Bishop Sithembele Sipuka.

"Now that the election is over, we expect the President of our nation to dispense with the politics of expediency and show firm hand in dealing with those implicated in corruption and state capture," the bishops wrote.

Ramaphosa, a member of the African National Congress (ANC) party which has held power in South Africa since the end of apartheid, first took office in February 2018.

His party won approximately 58% of the vote May 11 and retained parliamentary power in eight of the nine South African provinces.

According to Reuters, the ANC's margin of victory was the smallest since the party began, which Ramaphosa attributed to voters expressing their frustration with corruption in the party. Voter turnout was about 65%.

"The dwindling in the voter turn-out as well as the incidents of protests during the election are a stern warning to all the political parties that, twenty five years into Constitutional Democracy, there is a need to renegotiate the social contract between the ruling elite and those living in the margins of the economy," the bishops asserted.

South Africa is experiencing high unemployment, poverty and corruption under the ANC's rule. The ANC is the party of Nelson Mandela, the first black president of the country, elected in 1994 when the country became a constitutional democracy for the first time.

"In the previous 25 years, the Constitutional Democracy and its embedded social contract have failed to create tangible dividends, especially to the poor, in terms of acceptable levels of access to quality education, quality health care, job opportunities, and decent housing," the bishops said.

Therefore, they continued, the "mending of the social contract" over the next five years will involve "tackling the triple challenges of poverty, unemployment and inequality."

Ramaphosa took over leadership of the ANC in 2017 after former president Jacob Zuma resigned in disgrace, following numerous corruption scandals. This week Ramaphosa vowed to tackle corruption in the party.

The bishops called for the new government to "put the country first" and address the nation's economic issues in order to put the citizens of the country back to work.

By some estimates, 27 percent of South Africans do not have jobs, Reuters reports.

"In particular, we call on the ruling party to develop a national strategic plan, with measurable targets that can be subject to accountability, to address youth unemployment, which is a ticking time bomb and has at some level contributed the disenchantment and voter apathy among the youth," the bishops noted.

The bishops issued concrete expectations for the new president. These include: keeping those suspected of corruption out of the cabinet and the Parliament, reducing the size of the cabinet, introducing measures to more effectively prosecute those involved in corruption and state capture, and introducing measures to address "irregular, fruitless and wasteful expenditure in the government departments and municipalities."