Free World Class Education
FREE Catholic Classes
'This church has always been a neutral and safe space and I am horrified.'

Violence broke out between authorities and protesting students when the South African government proposed an 8 percent increase of already barely affordable tuition. 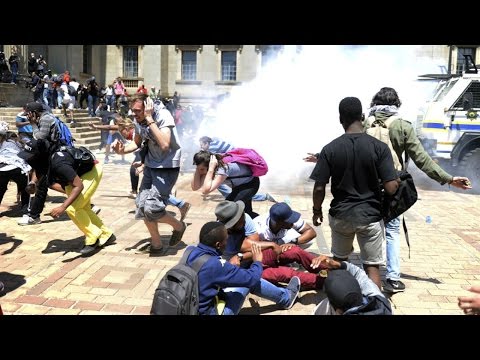 Keywords: 'This church has always been a neutral and safe space and I am horrified.'

LOS ANGELES, CA (Catholic Online) - For over two decades, South Africa has been struggling to stop the 300-year education bias in its schools.

Uprisings and violent protests occurred in the 70s and 80s and for the past few years students have been protesting the continuous rise in tuition.

A protest called Fees Must Fall was taking place at Wistwaterstrand University. It began as a peaceful protest, but quickly digressed to a violent stand-off between students and authorities.

Several hundred students then gathered outside the Great Hall.

"The students started throwing sizeable rocks that could have maimed or killed people," Patel explained. "The police dispersed the crowd using stun grenades, teargas and water cannons. Some of the crowd remained outside the Great Hall, while others have since dispersed into Braamfontein."

Then students began stoning a bus in Braamfontein and set it on fire.

Emergency responders were able to douse the flames, but authorities worry how far the protests will go.

In the midst of the chaos, Fr. Graham Pugin, a priest at Holy Trinity Catholic Church in the Braamfonein neighborhood near the University, was attempting to block the police from entering the church, where some students sought refuge.

CNA reported the priest allegedly held his hands up but was still shot at close range with rubber bullets.

Students helped shield the priest and quickly got him to safety in a video posted to YouTube.

Many were "shocked and distressed" to witness Father Pugin being shot in the face, which caused enough damage for a trail of blood to soak the front of his robes.

Fr. David Rowan, with the Ignation Solidarity Network, stated: "We believe there needs to be a concerted effort, involving all sectors of society, to deal with the historical context and systemic problems which make higher education inaccessible and unaffordable for millions of poor South Africans.

"We have to appeal to all involved to pledge themselves to restore peace on and around our campuses."

The South African Bishops' conference released a statement after Fr. Pugin was shot, in which they extended their "sincere sympathy and prayers for a speedy recovery."

Fr. Pugin was recognized for "offering refuge to frightened students" and the bishops explained they supported the students' right to demand an affordable education, though the violence is not to be condoned.

The bishops believe the best solution is not a free education, as: "[T]he solution suggested by the students at the moment is beyond the financial organizational capabilities of university authorities. However, it must remain on our agenda as the priority for the future.

"What is to be done is for the government to ensure that this academic year is completed in peace. The government and students must now iron out their difficulties.

"A compromise must be considered as the huge financial demands of university free education cannot be found instantaneously."

Meanwhile, Fr. Matthew Chalesworth, a colleague of Fr. Pugin's, relayed a message from the recovering priest: "He wants you to know he's receiving trauma care. He kindly asked that you do not react in violence because of him. The church has always been a neutral and safe space and I am horrified."

The Jesuit Institute South Africa released the following statement as well: "The shooting of Fr Graham has shocked and distressed many people, including students. He, along with the Society of Jesus, remain hopeful that a solution can be achieved.

"We believe there needs to be a national mediation effort to resolve the fees issue and stabilise the situation on campuses. We note the establishment of a national government task team on the fees crisis but believe that this alone will not deal with the problem.

"We believe there needs to be a concerted effort, involving all sectors of society, to deal with the historical context and systemic problems which make higher education inaccessible and unaffordable for millions of poor South Africans."