I recall joining a group of pro-life friends at an abortion site in Wilmington, Delaware, some years back. In the course of our prayers a truck marked "human waste" pulled up. The bodies of aborted babies were about to be extracted from that killing center. 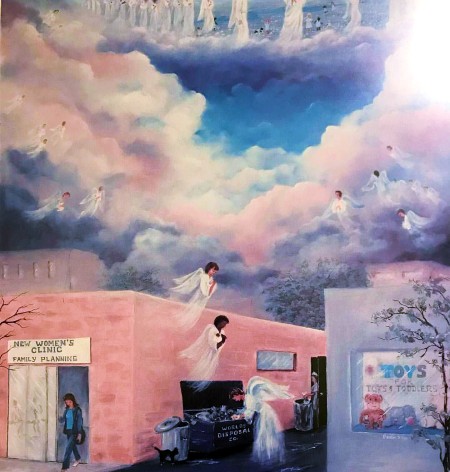 Its shocking appearance reminded me of the reality and yet cryptic dimension of abortion, whose "waste" runs in the hundreds of thousands every year and undeniably adds to the national diminishment of respect for human life in general. It's no surprise that abortion-busy cities are racked with rising crime rates.

That incident in Delaware reminded me of a painting called Earth's Trash, Heaven's Treasure. Trash bins outside the deceptively dubbed "New Women's Clinic - Family Planning," a cinder block human grist mill in Anytown USA, contained the discarded, non-buried "human waste" of embryos, perhaps fetuses as well, as allowed in many states.  Humans all.

Angels appear on the scene and each image of an angel draws the "waste" closer to the clouds and finally, heaven. There is a solemn procession in the uppermost scene of many heavenly spirits in sorrow and in reverence, a reverence stolen from these tiniest humans after their short earthly sojourn. Earth had given up these disposed bodies whose immortal soul will live forever as Heaven's Treasure.

For mothers who have had abortions, the painting gives hope of seeing their child again, in eternity. They both are God's treasure as He created - uniquely - every one of us,  "in His image and likeness" (Genesis 1:26). Simple words but lost so easily for so many mothers and fathers existing in our preconditioned, kill-solution mindset. It is a tragedy to estimate budding new life as a burden, or worse, an obstacle. Something to be thrown away as trash.  That is abortion.

But the God who created both mom and unborn baby loves both with a stamp that does not get "canceled" like our God-dismissing culture heralds today. His Son's "thirst" is for the life and salvation of both, and beyond them all who would "walk humbly with their God."

Burial places have always been the final resting abodes for the bodies of Jews, Christians, Muslims and those of other faith traditions, the earthly remains of the whole person, with a mind and hope for immortality. In our Creed's "resurrection of the body and life everlasting" our unresolved yearning for life to continue has its fulfillment, both body and soul, at that end of all time moment (Acts 24:15 and especially 1 Corinthians 15:12-14, 35-37, 42, 52, 53). This "delay" does not deny the immediacy of our eternal salvation choice right after the soul leaves the body - our death. But our bodies remain on earth.

Reverence for the saints, and their burial locales, are frequently honored by basilicas and shrines. These bodies, exhumed intact even centuries later, are a sign that this is not at all the end of the body. The earliest Creeds state so and weekly we attest to it. Corpses don't live on, but they remind us that their partial incorruption point to a new reassembly. We are not trash.

No one in the otherwise careful and persistent history of marking where saints have been buried, ancient and contemporary, has recorded looking for that of Mary, Jesus' mother.  From the earliest promptings of faith, not scripturally specific as the Ascension of the Lord (Luke  24:50-52), but held by the "sensus fidelium," the understanding of the faithful from the earliest centuries of the Church that "the Immaculate Virgin.. when the course of her earthly life was finished, was taken up body and soul  into heavenly glory" as summarily  pronounced as infallible belief by Pope Pius XII in 1950. Later, the 1994 universal Catechism of Catholic Church, 966, more recently recaps the papal statement : "The Assumption of the Blessed Virgin is a singular participation in her Son's Resurrection and an anticipation of the resurrection of other Christians" - a cumulative statement of already long-believed and centuries-cherished tradition.  Already in 431, the Council of Ephesus defined Mary as Mother of God, as she is the Mother of the one Person, human and divine, Jesus Christ.  From that honor  has been given by God the honor of preserving her from any sin (Immaculate Conception, defined 1854, Pius IX) and  glorifying her sinless body immediately after her death and for all eternity (Assumption, 1950, Pius XII).  There was no "waiting period"  for her.

God does not make junk. Earth's dumpstered "trash"  is heaven's well-received "treasure,"  in the case of every aborted baby.  A real human body, though not yet the glorified body as Mary's is since her passing from this world; or as we will become. The discarded unborn will rise just as we will in the end of time. Repentant mothers who gave up the lives of their unborn can and should take solace in their meeting again. Eternally.  How the body "comes back" is a mystery, but then it is for all of us. In the case of Mary, God, in His preserving and honoring both body and soul, holds out hope to us, if faithful, of what we can emulate and rise to as our post-death souls await that transformation.

In the many apparitions of the Mother of God, she appears not as a "ghost"  but truly as one of us, who prays and smiles, and is radiant and beautiful.

Mary's Assumption is the greater solace to mothers of aborted babies, for her consolation is tender, merciful and totally "in tune" with Her Son. Her triumph and glorification thus restores the vision of "made in the image and likeness of God" to a world that tries to cancel what is inconvenient, by killing.  The feast of the Assumption is the fulfillment of Our Lord's promise, intimately connected with the "human flesh" of Christ Himself uniquely sprung from Mary's womb, and remains with us in the Eucharist: Whoever eats my Flesh and Drinks my Blood, I will raise up on the last day (John 6:54).

It remains for us to dissemble the lies of hidden trash and build a culture of unshakable hope in the eternal treasure that each of us is created to be. Mary our Mother is our proven Intermediary and advocate in that ongoing task, Post-Roe and beyond.