Which 'Handmaid's Tale' Should We Believe?

Three pro-abortion protestors recently disrupted a Catholic Mass at St. Veronica's Parish in the Archdiocese of Detroit, shouting "Overturn Roe? Hell, no," and interrupting the priest's homily with cries of "Abortion without apology!" 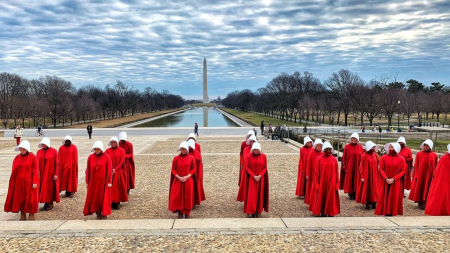 Anti-life protestors dressed as 'Handmaids.' The costume comes from 'The Handmaid's Tale' by Margaret Atwood, about a dystopian future where most women are sterile and those who can conceive are enslaved for the purpose of producing children for social elites. Sadly, such persons fail to recognize that pro-life is also pro-woman, and anti-life is anti-woman. You cannot be more opposed to women than to abort female children.

The pro-abortion protestors no doubt see the Catholic Church as a real-life manifestation of the stifling theocracy of the Margaret Atwood novel and popular Hulu series Handmaid's Tale. Pro-abortion women in red robes and white bonnets have become ubiquitous outside courthouses and statehouses since the series premiered in 2017.Handmaid's Tale presents a dystopian future where the U.S. has become the theocratic Republic of Gilead.  Women are kept oppressed and illiterate under the domination of a cultic patriarchy.  Their colored robes indicate fertility status.  The scarlet-robed handmaids are fertile, and set aside solely for reproduction. The narrator of the story, Offred, shares a description of their fate:

"We are for breeding purposes...There is to be nothing entertaining about us, no room is to be permitted for the flowering of secret lusts...there are to be no toeholds for love. We are two-legged wombs, that's all: sacred vessels, ambulatory chalices." (Handmaids Tale, P. 136)

The idea that this fantasy serves as some type of prophetic warning of what life will be like for women after the fall of Roe v. Wade is absurd. Still, the story provides a powerful narrative, a distorted lens through which abortion activists view conservative Christianity and those who oppose abortion. During the protest at St. Veronica's, one of the activist stripped naked and stood on top of the pew for maximum theatrical effect.  A photo of her antics communicated something far more revealing than her naked body.

As she was perched atop the pew, the protester was facing an icon of the Blessed Mother and the Child Jesus, and a statue of Mary as Queen of Heaven.

This scene reveals two contrasting images of women, and two different archetypal representations of Eve, mother of all the living from the book of Genesis.

This misguided woman, seduced and corrupted by the spirit of this age, stands as an icon of Eve after the fall, before the redemption of Christ.  Perhaps this woman and her fellow protestors have personally experienced or witnessed abuse and exploitation at the hands of sinful men.  Sadly, like Eve, they may be tempted to no longer trust in God's Providence over human life, and have eaten from the tree of choice and reproductive rights.

In striking contrast, we behold the icon of Mary and her Son. Mary is the New Eve, not in rebellion to God's Word, but a servant to the will of God. When Mary was visited by an angelic messenger with an announcement of her unique vocation in salvation history, she replied, "Behold the handmaid of the Lord, be it done unto me according to your word." (Luke, 1:38)

Mary as handmaid is not a slave of the theocracy featured in The Handmaid's Tale.  She is the humble servant of a God who embraces an unimaginable level of humility.  The Eternal Word of God, as St. Paul says in Philippians, emptied himself, taking the form of a servant, a vulnerable child in the womb of the New Eve.

The tree of life is now the wood of the cross, the torture and shame that Mary's Son embraced as the perfect sacrifice to redeem the human family from the sin of our first parents.

This is not the fervent progressive fantasies of The Handmaid's Tale.  This is the heart of the Christian faith; a message of true liberation and freedom from the bondage of Satan's lies.

Pray for those Who Persecute You

We must remember how much the Blessed Mother loves her children, especially those, like the activists at St. Veronica, who are most in need of the healing and forgiveness of her son Jesus. The corruption of their innocence, and darkening of their minds and hearts, intimately wounds her Immaculate Heart.

While we may be tempted to lash out in anger at attempts to disrupt the sacred liturgy, perhaps we can use these opportunities to pray and intercede for the protestors, for the children at risk for abortion, and all who have been wounded by their participation in abortion.

As protests continue, and as protestors are charitably and safely removed from the Church, the congregation could pray the Our Father/Hail Mary/Glory Be in reparation for the offenses against the Immaculate Heart of Mary, and for the conversion of those seduced by abortion ideology.

Our Lady of Fatima, pray for us.