Something to Celebrate: The Day of the Unborn Child

In 1995, then-Pope John Paul II published his encyclical letter Evangelium Vitae on March 25, the Feast of the Annunciation. It was not a coincidence he chose that day. 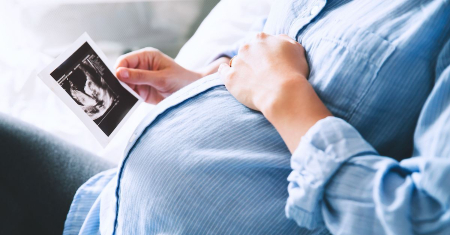 This feast marks the moment at which the Incarnation took place. At Mary's "Fiat," God began existing in a human nature - a human nature at the earliest stages of its development within Mary's body. God's incarnation began as an unborn child. Nine months to the day later we celebrate the birth of Christ on Christmas.

"Mary's consent at the Annunciation and her motherhood stand at the very beginning of the mystery of life which Christ came to bestow on humanity," the pope noted in the encyclical.

It's also no coincidence that March 25 was chosen as the Day of the Unborn Child, a day we recommit ourselves to love and serve the weakest among us.

The Day of the Unborn Child has been officially established in many nations, in some cases by the Church and in other cases by the civil government. Elsewhere, the day is observed by individuals, families, and organizations.

The celebration of March 25 as the Day of the Unborn Child was first recognized in El Salvador in 1993 and has grown rapidly. In 2003, the first Provida International Congress in Madrid with representation from over 20 countries in Europe and the Americas institutionalized March 25th as International Day of Life. Since then, the day has grown in popularity. The countries recognizing it include Argentina, Guatemala, Chile, Costa Rica, Nicaragua, Venezuela, Dominican Republic, Uruguay, Panama, Peru, Slovakia, Cuba, Austria, Philippines and Romania.

Observance of the day in the United States has been carried by pro-life groups. Priests for Life has organized a coalition of dozens of national pro-life leaders to publicize and promote the Day of the Unborn Child. In our joint statement (see www.DayOfTheUnborn.com), we suggest several ways that individuals, families and church groups can observe the day, even at this last minute, including:

- Spiritually adopt an unborn child and pray for him and his mother for nine months.

- Offer a Mass, Holy Hour or a prayer vigil for life.

- Pray outside an abortion clinic. The 40 Days for Life Campaign is a good way to get involved this way.

- Host a pro-life movie night for friends and family members.

People also can pray, individually or together, a prayer I wrote to the Unborn Child Jesus:

Redeemer in the Womb

Lord Jesus Christ, we thank you that when Mary, your Mother, said "Yes" at the Annunciation, You took our human nature upon Yourself. You shared our life and death, our childhood and adulthood.

You also shared our time in the womb. While still God, while worshiped and adored by the angels, while Almighty and filling every part of the universe, You dwelt for nine months in the womb of Mary. You were our Redeemer in the womb, our God who was a preborn child.

Lord Jesus, we ask You to bless and protect the children who today are in their mothers' womb. Save them from the danger of abortion.

Give their mothers the strength, like Mary, to say "Yes" to you. Give them grace to sacrifice themselves, in body and soul, for their children.

Help all people to recognize in the preborn child a brother, a sister, saved by You, our Redeemer in the womb, who live and reign forever and ever. Amen.

The United States has a pro-life movement to which the rest of the world looks up. Let's continue to lead the way, by celebrating with vigor the Day of the Unborn Child!

Father Frank Pavone is national director of Priests for Life and the national pastoral director of Rachel's Vineyard Ministries and the Silent No More Awareness Campaign. The books he has authored include Abolishing Abortion and Proclaiming the Message of Life.