The Bishop of the Diocese of Fresno, Joseph Brennan, has issued a letter that accuses defrocked priest, Craig Harrison of Bakersfield, California, of sexually abusing several minors. The letter is the latest development in a tit-for-tat series of threats and retaliation between Brennan and Harrison. The case highlights a problem within the Church that must be addressed with aggression. 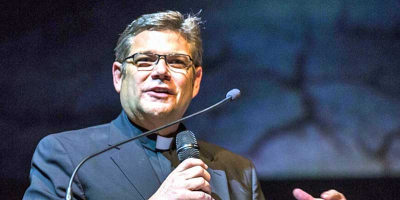 Craig Harrison was a popular priest in Bakersfield, where he still retains a loyal and powerful following.

LOS ANGELES, CA (California Network) - When he was a priest, Monsignor Craig Harrison was one of the most popular and charismatic figures in the city of Bakersfield, California. He served as chaplain for the local police department, managed a Catholic combined elementary and middle-school, and oversaw one of the largest parishes in the community. He even adopted and raised four children and became a legal guardian for four more, all boys. But allegedly, Harrison was keeping a secret: he was gay, and already had a history of inappropriate contact with boys and young men.

Everything changed in 2019 when Harrison was publicly accused of abusing minor boys. At first, Harrison vehemently denied the charges and retained legal counsel. But encouraged by this accusation others came forward with similar allegations. Before long, the public learned that Harrison had previously been accused of inappropriate behavior, but the bishop at the time, John Steinbock, kept the allegations covered up.

In fact, allegations against Harrison date back at least to 1998 when he was a pastor in the small community of Firebaugh, Ca. A minor male who lived in the parish rectory accused Harrison of touching his genitals. The Diocese of Fresno conducted an internal review, but did not find the claims to be credible and dismissed them.

Yet, other identical accusations were made by other minors. In 2004, the FBI issued an official report that Harrison was doing the same thing to boys at a group home he operated.

Most priests, when accused of crimes such as these, go underground, seeking to avoid the spotlight and public scrutiny. But not Harrison. Harrison fought back, retaining a legal team and rallying prominent public figures to his defense. He sued the Diocese for defamation, but lost the case when it was tossed by a Superior Court judge.

Amid this, the local police department publicly admitted they investigated the 1998 case opened against him in Firebaugh, but dismissed it for lack of evidence. They never forwarded the case to the District Attorney's Office so they could make a determination. Why not?

Harrison fought hard to keep his position within the Church, but Bishop Joseph Brennan insisted he step down. Harrison countered that Brennan had a vendetta against him. Eventually, Harrison voluntarily requested to be laicized.

Once defrocked, Harrison went on to use his celebrity and knowledge to open a counseling service. Bishop Brennan replied by arguing that Harrison was unqualified to provide such services to people. And on Sunday, September 6, a letter from the bishop was read from the pulpit at St. Francis Church where Harrison served as a pastor. It was also read at other parishes in the Diocese. The letter stated that Harrison had previously been accused of sexual misconduct with minor boys. The letter explicitly stated, "The allegations were credible."

In all, Harrison is accused of abusing 7 minor boys, among other allegations against him regarding young adult victims and financial malfeasance.

Perhaps most troubling of all is this line from Bishop Brennan's letter: "As noted above there are certainly a number of things that I simply cannot share with you." Yikes.

In Harrison's defense, none of these allegations are proven, and no charges are filed against him. But that is likely because of legal limitations more than anything else. The Fresno County District Attorney issued this statement: "While the allegations made against Monsignor Harrison appear credible to investigators, they reportedly occurred in the 1990s. These allegations were not reported to law enforcement until April of 2019. Delayed reporting is not uncommon in sexual assault cases, but it can limit the ability to criminally charge and prosecute offenders."

In all, many have the sense that Harrison has evaded prosecution by various means and therefore cannot be found criminally guilty. However, when so many accusations are issued by so many people, it is an extreme, strenuous mental and moral exercise to dismiss them all.

Meanwhile, Harrison, who voluntarily requested to be laicized, is stripped of all privileges associated with the priesthood and is relieved of all obligations. As a defrocked priest, he should not construe himself as retaining any vestiges of the title. He may not refer to himself as "Father" or "Monsignor" and the public is discouraged from doing the same. In fact, the only thing he is permitted to do henceforth is hear the confession of a person in imminent danger of death. He may not give homilies, preside over marriages or Vigils for the Deceased, or even publicly guide the faithful in a Rosary.

For now, Harrison remains in business as a counselor, and while he is not exonerated, there is no news to suggest a criminal case against him is making progress. He has not been arrested or charged and barring any breakthrough development, this may be as far as this troubling case gets.

Harrison appears to be part of a massive problem within the Church. At least at present, in the United States, the priesthood is attracting individuals with a disordered sexual appetite who struggle with same-sex attraction. This attraction is not always expressed towards children, it can often be expressed towards other adult males. There are no laws that criminalize homosexual behavior between consenting adults in the United States, but it is against Church law and teaching.

Why are the seminaries not screening for this? Or, if they are, then why is the screening so obviously ineffective? The Church teaches that all people are called to chastity. This includes heterosexual persons as well. However, some of the individuals who become priests clearly show traits demonstrated by people who struggle with same-sex attraction, even to the point of displaying obvious, effeminate speech and behavior. How is this acceptable?

The problem could arise from a libertine culture, steeped in sexuality. It could also be that these problems are ancient, and are only now coming to light thanks to modern culture, law, and technology. Likely it is both.

The Catholic Church is expected to be a paragon of moral virtue. Although it is a divine institution, protected by the promises of Christ, and beyond destruction, most people do not view it in that way. Instead, they tend to judge the Church by its lowest denominators. And when its clergy are less than impeccable, people wonder what right the clergy has to preach to them about morality. The misbehavior of the clergy drives people away and endangers the souls of many.

The Church is facing a severe existential crisis as a moral authority. It must address this issue with extreme aggression. Otherwise, the Church in the United States will continue to decay, and fail in its mission to evangelize and save American culture, which has long surpassed Sodom and Gomorrah in depravity.