Supreme Court delivers decisive victory in battle to save the unborn

Free World Class Education
FREE Catholic Classes
Texas law is allowed to stand, and will save millions of children.

The Supreme Court refused to block a Texas law that outlaws abortion after a fetal heartbeat can be detected. The Texas law will now become a precedent for similar laws in other states. What does this mean for the future of children in the United States? 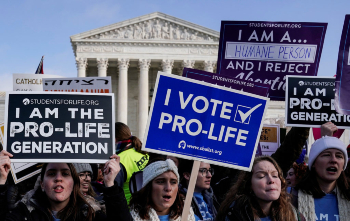 LOS ANGELES, CA (California Network) - Late Wednesday night, the Supreme Court declined, 5-4, to hear a case brought by abortion providers in Texas. The providers asked the Supreme Court to grant them relief from a Texas law that bans abortions after a heartbeat is detected. It also allows private lawsuits against people who perform illegal abortions.

Now, the Texas law goes into effect and is already compelling abortion providers to halt some operations. Since the law is successful, it will become a template for other states, which are certain to pass their own versions. While this does not mean a complete ban on abortion will go into effect, it will at least serve as a partial ban, providing a better chance at life for thousands, possibly millions of children.

Although the law does not go far enough to satisfy, it is still a major victory for life.

The next question is, what happens in the future? Since the Supreme Court declined to hear the case, it remains subject to future challenge. Technically, this would also be true had they heard and upheld the case, although it would be harder to challenge the law. For now, the law will stand, but if the balance of the court once again becomes anti-life, then the case is likely to be swiftly challenged and the law overturned. In short, this victory is a temporary one unless...

Unless voters continue to elect presidents with a strong -pro-life commitment.

There is little better than can be done. In 50 years of pro-life advocacy, with millions and millions of dollars spent, the pro-life movement, while important and influential, has little to show for itself. Simply praying and trying to convince people not to kill children in the womb produced no result. In the end, it was political action that made the difference. And it will be political action that preserves the right to life for children.

The right to life remains under intense assault across the nation. Not just for children, but also for the elderly and the sick. There are calls for euthanasia and other barbaric perversions of medicine. The pro-life movement, and the political movement associated with it, must not limit its advocacy to children, or merely to birth. The right to life, to dignity, and to all the things that make it possible for a person to know God must be preserved from the moment of conception to natural death.