"I have great news: my wife's expecting," a man told his friend.  "Wow, that's great," the friend replied.  "When's your baby due?" 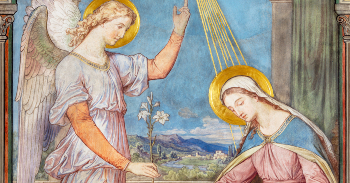 This happy bit of conversation is the good news from generation to generation, bringing surprise as well as joy.  But -- not to play DUH here --what is the expectation all about?  "We're going to have a new child!"  is a seemingly safe answer.

Yet... "expecting" ...  "Going to have" ...    The timing is off.  Something is already set in motion; otherwise there would be no joy, or even surprise.  Of course an exchange like this one means looking forward to the birth of the child, but an incredible journey of development will have happened to that child before seeing the outside light of day (or hospital lamps).

Each season of Advent thrusts us forward, "expecting" the Baby Jesus at Christmas, whether recalling the thousands of years Israel longed for its Messiah or the real-time shopping sprees to get the right 2021 gifts (ok, we'll wait a bit on that!).  December 25 is the date that explodes the eyes of our little ones opening up their surprises so neatly wrapped.  But Jesus, the Incarnate Son of God and Son of Mary, did not come to earth at Christmas.  He came nine months earlier, at the Annunciation to Mary by Gabriel.  Mary's all-pivotal, humble, joyful, obedient "Yes!" began the Lord's sojourn on earth and at that moment, at Nazareth, did she become the Mother of the Savior, not at Christmas in Bethlehem, where Jesus was born nine months later.

Mary's immediate Visitation to Elizabeth follows from the evangelist Luke's recording "in the sixth month" of Elizabeth carrying John the Baptist. When Mary arrives we learn of a four-person exchange. First,  six-month silent John "leaping for joy" in Elizabeth's womb in his nearness to the early embryo of the Word Made Flesh in Mary's womb, thus explaining the contagious joy in the words of Elizabeth who acclaims Mary as "Mother of the Lord."  Lastly Mary bursts forth in her praise-filled proclamation, the "Magnificat."

What more powerful "pro-life" interchange could one possibly imagine?  Or "expect?" And here the Little Baby (not yet named Jesus) influences the big baby John. Besides, Mary knew when she became pregnant with her child from day one, the Annunciation.  The heartbeat of an embryo can be detected as early as 21 days, but most mothers do not know they are "mothers" until weeks after that.

Mary, entirely open to God's plan for her (and the human race), would not have known how all the details would play out, but she knew she was with Child from the first moment.  Our March 25 Solemnity, the "Annunciation," is not about Mary's Immaculate Conception, celebrated December 8, when she was conceived.  But it flows from the divine honor of God's choosing Mary and her consenting to be mother of the Savior.  So this Solemnity of the Annunciation celebrates the moment from which all other Marian attributes and honors are derived. January 1 celebrates "Mary, Mother of God" to emphasize a new order of redemption budding as a new year correspondingly begins, but the earthly Sojourn of our eternal Redeemer enters time by Mary's Womb at Nazareth, nine months before Christmas.  That is her greatest honor, and just think what her "Yes!" gave the human race!

All these mysteries  -- Annunciation, also called Incarnation, the Visitation with that solemn four-way blessed communion of mind, soul and body, and of course the Birth at Christmas are integrated in God's plan for our Salvation: "God so loved the world that He gave His Only Begotten Son" (John 3:16).  It's a sacred continuum.  So is every human conception: zygote, embryo, fetal and newborn.  All expected and all to be protected.  All unique, all sacred.

Now where would you and I be if any stage of that continuum were "canceled" by aborting or if Joseph, whom we particularly celebrate this year, decided to bow out of the picture?  Yet how many fathers do just that, or worse, trade the inconvenience of the moment for the very life of the child?  For what sort of nation lets its legal system eviscerate its future as the infamous Roe did to the U.S.?  Both our Blessed Mother Mary and St. Joseph bore any inconvenience or uncertain, even threatening societal consequences. Mary could have been stoned for a totally false suspicion of infidelity to Joseph.  Instead they both trusted in faith according to God's direction imparted to them.

Let us pray, persuade and persevere, especially during these current death-bent federal attempts to crush pro-life safeguards, to resist that evil and stand up for the "least of His brethren," those who have no vote and no choice - not "expectant" but alive, precious babies.  Let the meaning of the Annunciation bring that home -- not just on March 25, but throughout the year.