The Supreme Court has struck down a Louisiana law that required doctors to have admitting privileges at a nearby hospital before they can perform an abortion. Justice Clarence Thomas criticized the 5-4 ruling, pointing out the law was "perfectly legitimate." 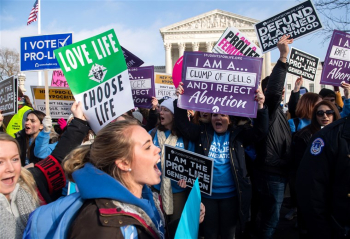 The Supreme Court has once again betrayed the safety of millions of Americans.

LOS ANGELES, CA (California Network) - The Supreme Court on Monday struck down a Louisiana law that required abortionists to at least have admitting privileges at a nearby hospital before performing an abortion. While the law is often regarded as an "anti-abortion" law, it is more correctly a public safety law, since it does not address abortion, but rather the conditions to which women are subjected.

Abortion is a dangerous procedure which obviously kills half of the people who enter the clinic. Occasionally there are complications which can result in injury or death to the mother. In the past, women have died as a result of issues when being admitted to the hospital following a botched abortion. Such cases are rare, but the precaution is as reasonable as any other.

Despite the fact the law improves women's safety, abortionists agitated against it because it would impose an additional expense and work on the part of the person being paid to perform abortions. Abortionists argue it would make abortion inaccessible for women since some providers would not want to go through the trouble and expense of securing admitting privileges.

There is no evidence to show abortionists quit their grisly work simply because they are required to obtain admitting privileges at a facility dedicated to saving human life.

The Supreme Court struck down the law on partisan lines with the exception of Chief Justice John Roberts who joined the liberal justices in their 5-4 decision.

Justice Thomas dissented, explaining, "Today a majority of the Court perpetuates its ill-founded abortion jurisprudence by enjoining a perfectly legitimate state law and doing so without jurisdiction."

In response to the ruling, Marjorie Dannenfelser, who is president of the Susan B. Anthony List, said, "Today's ruling is a bitter disappointment. It demonstrates once again the failure of the Supreme Court to allow the American people to protect the well-being of women from the tentacles of a brutal and profit-seeking abortion industry."

The law was previously on hold due to a block applied by the Supreme Court in 2018. An appeals court in New Orleans found the law was unlikely to have the impact its critics claimed. The court clearly found that abortionists were not making enough of an effort to establish working with local hospitals.

Hope is not lost. Several states have passed or may pass laws that will defend life, in some cases as early as 6 weeks. And as technology and other advancements progress, we learn more about the development of life in the womb, and how to better protect that life.

Of course, a complete moral transformation of the American nation is still required. For that, we are called to pray and work against the forces of evil.