I can remember vividly first reading the announcement from Rome that Pope John Paul II would be issuing an encyclical called "The Gospel of Life" (Evangelium Vitae). My heart leapt; I smiled widely. I knew the encouragement this would bring to pro-life activists everywhere. I knew this would be a Magna Charta for the pro-life movement. 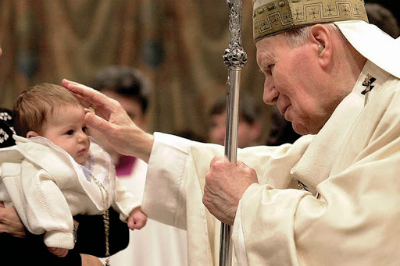 I had only been working for a couple of years as the fulltime National Director of Priests for Life. Cardinal John O'Connor had granted me permission to fulfill what I had described to him as a "call of conscience" to devote my entire life and ministry to ending abortion.

Now, he - as a close advisor of John Paul II - was part of creating a document that would affirm not only the Church's position on abortion, but the reasons why it is a more serious and fundamental moral issue than the many other moral challenges of our time.

John Paul II has been declared a saint. Cardinal O'Connor, along with many others who collaborated with John Paul II on this document (such as Cardinal Elio Sgreccia) have been called home to the Lord.

The gift has been placed in our hands, and it is up to us now to unpack its riches and wisdom for a new generation.

Shortly after Evangelium Vitae was issued, I had the privilege of working at the Vatican for two years, in the office that coordinated pro-life ministry for the whole Church. I saw the importance that John Paul II placed on this document; I spoke with him about it, and with many of those who collaborated with him to write it.

And from them I learned what I have seen over these 25 years: this document is meant to light a fire, to mobilize a movement, to sustain a self-sacrificing effort to defend the weakest among us.

And it does precisely that. It has encouraged people already active in the pro-life movement and has brought new people into it. It has helped Catholic priests and theologians present the pro-life message and it has nourished and inspired clergy of other Christian denominations, many of whom have spoken to me of their love for this document.

The Gospel of Life was placed in our hands when we in the United States were in the shadow of the very pro-abortion Clinton Administration. He permitted the most gruesome forms of abortion - twice vetoing the ban on partial-birth abortion - exported abortion overseas, and punished pro-life leaders and activists for peaceful pro-life activity.

We very much needed the robust call to action that this document contains, and its message to public officials that when a country legalizes abortion, it becomes "a tyrant state," brings about "the death of true freedom" and "the disintegration of the state itself" (see EV n.20). That sounds like more than "just one issue."

We needed its words of mercy for those who have had abortion, and those words have born great fruit in the continued growth of such healing ministries as Rachel's Vineyard and Silent No More (see EV n.99)

We needed its affirmation of the central and fundamental importance of the right to life, and the reasons abortion deserves priority attention among our moral concerns. Among those reasons are that nothing takes more life than abortion, its victims are the most defenseless, the right it destroys is the condition for all other rights, the violence of abortion is transformed into a "right," and the violence is committed within the very "sanctuary of life," the family (see EV n.11)

We need all these reminders today. The pro-life movement has been nurtured and has grown under The Gospel of Life. We have had seasons of strong political and legislative support for the unborn, despite the continued war against them. We have indeed seen the abortion debate take on even more prominence in our public discourse, just as this document says it must. We have seen more and more clergy and laity develop resources and projects based on the vision of this marvelous document. And we have seen prayer efforts multiply, just as Evangelium Vitae calls for.

So today, a quarter of a century after this document was published, we can rejoice in the fruits it has borne, and we can take it up again as if on the first day, to forge a path in what is still a culture of death, but to do so with even more confidence in the victory of life!

***For information about "The Gospel of Life," to read the text itself, and to utilize the Study Guide prepared by the pastoral team of Priests for Life, visit www.GospelOfLife.org.