Ryan Colquhoun recently celebrated his first birthday, but this was a day his doctors and family never expected to come. 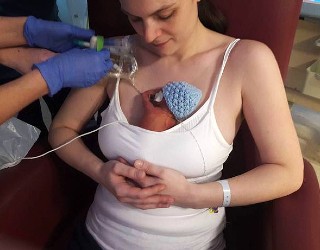 Just after being born, Ryan's heart stopped for 40 minutes, according to Mirror. However, Ryan's team of doctors kept him warm in a plastic sandwich bag while they worked to resuscitate him for 40 minutes.

Against all odds, the miracle baby pulled through.

"They never gave up the fight for him," expressed Claire, according to Mirror. "They worked on him for about 40 minutes."

Over the next months, though, Ryan would face several other life-threatening medical problems, including a collapsed lung, a bleed to the brain, E.coli, hypothermia, spesis and laser eye surgery all before his first birthday.

"I call him Ryan the Lion -- he never gave up fighting. It was one hell of a journey but it was the most rewarding," Claire shared. "They worked a miracle on him. He's living proof that they can survive this."

Faith is a powerful thing. Ryan's story is about the testament of a mother's love, faith and the will to never give up. Through God's love, miracles can happen and miracles do happen.

Babies are the most precious gift in life.


Lord God, we thank you for the gift of new life. We thank you for this precious baby's safe arrival into our world. We pray this baby would sleep peacefully and be kept from harm. We pray you would bless this child as they grow. Keep them safe and strong in the weeks, months and years ahead. Give us grace and strength through the highs and lows of caring for a newborn baby. In Jesus' name. Amen