Science is providing a better, more detailed look into child development in the womb. The result is we are seeing that babies can show personality as early as 18 weeks. The advance is key to humanizing children in the womb. 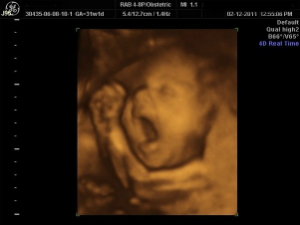 Does this look like a baby or a cluster of cells?

LOS ANGELES, CA (California Network) - The abortion debate comes down to two basic arguments. The first is that the child in the womb is actually a human life, and therefore worthy of protection. The second is the matter of autonomy and the idea that a mother can evict her own child from the womb at any time.

Those who promote abortion profess these arguments with religious fervor. The child isn't a human until it is born, they insist. And since it is inside the mother's body, they compare carrying an unwanted child to some kind of rape, as if the child were an assailant.

The second argument is incredulous on-face. The child did not ask to be placed in the womb of an unwilling mother. The unborn child has no power of consent, despite its humanity. The baby is an individual human life entitled to its own autonomy and rights.

Of course, that argument depends on demonstrating that the baby is a human life.

The argument seems like a no-brainer. Any study of fetal DNA will demonstrate that the unborn child is human. What else could it be! However, abortionists like to attach conditions to humanity, such as cognitive ability, the ability to breathe on one's own, or the ability to interact and socialize with others.

These are frightening conditions because even fully adult humans sometimes lose these abilities, or children can be born impaired. Are these people less than human? Is a person on life support no longer human?

Science is helping advance the pro-life argument --and the fact, that the unborn are truly human.

Science is a method of investigation, a way of finding things out. What we are finding out thanks to improved methods is that yes, the child in the womb exhibits human features and behaviors quite early. Improved ultrasound technology allows moms to see their child's face in as little as 18 weeks. At that age, baby can already suck his thumb or clap her hands. Brainwaves and a heartbeat are present.

It remains debatable how self-aware the baby is, and it is likely that at such a young age most movements are reflexive rather than voluntary. However, they do humanize the child, and for someone debating whether or not to abort a pregnancy, seeing that could inform their decision-making.

It could also inform the decisions of lawmakers who have a responsibility to keep their constituents safe. That would include protecting unborn children and their mothers, both of whom can be harmed and killed as a result of abortion.

By humanizing the child within weeks of conception, lawmakers could have the evidence they need to change the law. While abortion bans seem unlikely, lowering the threshold from something like 28 weeks to 22 or even 18 would save lives.

For the logical thinker, there is no question the child in the womb is human and therefore entitled to some protection. That protection should begin at conception, but we live in a world that refuses to acknowledge that despite the findings of science. Still, every move closer to conception saves lives and brings us closer to a time when all people realize that abortion is a profound evil.