'Window to the Womb': Amazing MRI scans capture images of babies like you've never seen before!

When the fetal ultrasound gained popularity in the 1970s, it was hailed as a "window to the womb." But now, new technology could offer a much more in-depth view of babies before birth. 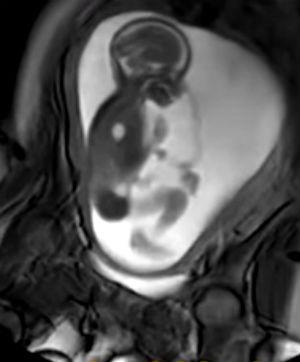 These MRI scans are taking images to the next level.

London, England (CNA) - Courtesy of a recent multimillion dollar project based out of London, some parents are able to see clear scans of every movement and organ of their babies in the womb starting as early as 20 weeks, using advanced MRI technology.

"There is nothing quite as emotional as seeing your unborn child moving inside you, and these MRI scans are taking images to the next level," stated Cathy Ranson, the editor of ChannelMum.com, a website that is distributing videos of the MRI scans.

"They are truly breathtaking," Ranson continued.

Traditionally, ultrasounds are used during pregnancy to check in on growing babies in the womb using high frequency sound waves. Although useful, ultrasounds usually produce limited visual scopes of the womb and can vary in quality depending on various factors, such as age, weight, and position.

However, a curious team of medics pushed the limits of the ultrasound to find out if there was a better way to get in-utero scans.

Top minds from Kings College London, St. Thomas' Hospital, Imperial College London, University of Firenze, the Hospital for Sick Children in Toronto and Philips Health were given ÂŁ10 million from the Wellcome Trust and Engineering and Physical Sciences Research Council to see if they could advance antenatal scans.

This team of medics composed a new series of algorithms and magnetic fields to go beyond the limits of the ultrasound. This new technology is allowing clear pictures of the entire womb, making details like a 20-week heart valve crystal clear.

A video, produced by the iFIND project, shows just how detailed the scans are: the baby is stretching, turning, and even playing with the umbilical cord. They also recorded the reverberations of the baby's movements, which could be seen rippling through the mother's belly.

In addition to creating the optimal scan, the MRI technology also has a mechanism that auto corrects any small movements to produce an overall smooth image.

Dr. David Lloyd, a Clinical Research Fellow at King's College London, said the new MRI scans "can see the structures inside the body, regardless of whether there's bone, muscle or fat in the way."

"It is also one of the few imaging techniques that is safe to use in pregnancy," Dr. Lloyd continued.

This new technology is more than just a great picture for excited parents to see. The MRI scans could also reveal complications or growth deficiencies earlier in the pregnancy, which could allow for advanced treatment even before the baby is born.

The MRI scans have already kicked up some debate, especially in the UK where abortion is legal up to 24 weeks. These new scans, showing how babies actively move around at 20 weeks, is making the current abortion limit even more questionable.

Moving forward, the iFIND project wants the MRI scans to become available for all pregnant women around the world.

This article was originally published on CNA Feb. 8, 2017.