Adoption: Why are more mothers choosing abortion over adoption?

At 21 years old, Millie Lopus was pregnant and scared. A rising college senior at Loyola University Maryland, she was being pressured into having an abortion by her ex-boyfriend, the father of the child. 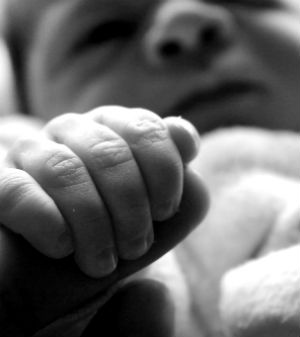 Mothers choose abortion at a far greater rate than adoption.

Washington D.C. (CNA/EWTN News) - But after he drove Millie to a nearby Planned Parenthood to set up an abortion appointment, she recalled having "a sliver of grace," and she "did not set up an appointment that day."

"I chose instead to go through with the pregnancy," she recalled, and gave the baby up for adoption. "I am eternally grateful that I have been spared the abortion experience," Lopus said at a May 15 panel on "Adopting Life."

The Catholic Information Center in Washington, D.C. hosted a three-part panel series on adoption on May 8, May 15, and May 22. The goal was to discuss how the pro-life movement can create a "radical culture of hospitality" for those facing a crisis pregnancy, and for their children.

Lopus' story reflects countless other narratives of young mothers who are pressured against giving their baby up for adoption.

"Adoption as a real solution is often overlooked," said Elizabeth Kirk, a writer and researcher who spoke on one of the CIC panels.

There are several reasons for this, she explained. Women have said in studies that "adoption is not a realistic option for them" and that they would suffer more guilt in leaving their child to an unknown future than in terminating the pregnancy.

They may also be facing pressure from loved ones or advisors against adoption. There are reported instances of Planned Parenthood workers "advising women that adoption is more traumatic than abortion," Kirk said. Even crisis pregnancy centers may be reticent to bring up adoption to a mother because they fear that broaching the topic may "drive her to abort her child."

Yet if a women is truly incapable of raising her child, and adoption isn't in the picture, then abortion may seem like "the only real choice," she said.

As for Millie Lopus? After she decided to carry the baby to term, she returned to school for the fall semester of her senior year. She played the entire tennis season, where she finished first in the conference in the doubles tournament. She left Loyola in the spring to have her baby daughter, and gave her up for adoption to a Catholic family.

Her daughter is now 24 years old, an actor and singer, and Lopus has three other children of her own. She now directs the New Women's Care Center in Baltimore, a Catholic pro-life crisis pregnancy resource center offering free pregnancy tests, sonograms, and resources for pregnant mothers. For post-abortive women, they also refer for retreats through Project Rachel.

Yet within the pro-life movement, there still exists a debate over how much emphasis to place on the option of adoption. Many mothers may be emotionally or financially unable to raise their child and some, like Kirk, argue that far too little is said to these mothers about their option to give their child up for adoption.

Negative stories from the foster care system may be responsible for much of the stigma against adoption, even though mothers have the choice of offering a child for adoption privately or through a small center. There are almost 112,000 children waiting to be adopted in the foster care system, the average wait time being 31.8 months. Around 55 percent of the children have been placed with families three or more times, Kirk noted.

Studies show detrimental effects on children the longer they stay in the system, deficits in education, relationships, and an uptick in future criminal activity.

As a result, pregnant women "think their children are better off dead than placed with an adoptive family," Kirk said.

Yet many Catholic parents are waiting to adopt and love a child, especially if they are not able to have any of their own, panel members insisted.

Once the prohibitive costs of the process are removed from the equation, "everyone starts looking at adoption for what it really is, it's the greatest act of love," Mary L. Ball, J.D., founder of Holy Family Adoption Agency, said at the May 15 CIC panel.

Birth mothers "want more for their child than they can give them," she said, while a married couple is also looking to give a child unconditional love.

"I really think that adoption is the missing link in the pro-life movement," she said. "We don't talk enough about it."

Dr. Grazie Christie, a radiologist and a policy advisor for The Catholic Association, agreed, and shared her own decision to adopt after having four children.

"We didn't need a child. We had plenty of children," she said of her family, yet "we had so much" and wanted to adopt as "an act of love." They adopted a child from outside the U.S.

Yet she wasn't ready for the skepticism and criticism she faced for her decision.

"We got a lot of negativity from people around us," she said, including questions and observations like "You're crazy," "You don't know what you're going to get," "You're going out to get other people's problems and bring them home," and "Don't you have enough children?"

"I was pained by it," she said, but when she received her new daughter and began caring for her, "it was hands-down the most beautiful thing that has ever happened to me."

More married couples, upon finding that they are unable to have children, are turning to fertility treatments or in-vitro fertilization, but there are thousands of babies available for adoption, aching for a home, Dr. Christie said.

Ultimately, Christians and pro-lifers should be doing much more to promote adoption even if they themselves can't adopt children, panel experts insisted.

"We have to very much, very specifically, very purposefully build a culture of adoption," Dr. Christie said. "It has to be seen as yet another way that God matches children with their parents."

"We all have a duty to practice this kind of radical hospitality" and "welcome the stranger," Kirk said. And today's stranger is the unwanted child in danger of abortion, she added. "Every couple is called to think about what they're doing to help the orphan, to help the widow."

This doesn't necessarily mean that all couples must adopt a child, however.

For instance, Tina Andrews is CEO of ADORE Children and Family Services, which is a "therapeutic foster care agency" for children who have been neglected or abused. For prospective parents, she promotes "fostering to adopt," where couples must undergo 40 hours of training and be involved in a foster parent support group before they can be paired with a child. ADORE monitors the placement of the child even after the family takes them in.

Many parents may "want a child," she said, but they lack the parenting skills or the necessary support system for a child, and so her group looks to make sure that the fit will be the right one.

However, promoting adoption may be as simple as "educating people about the reality of what contemporary adoption looks like," Kirk said.  Now, a mother has more power to choose the family she will place her child with, and this growth in culture should be talked about.

Dr. Christie said that while going through the adoption process, she was struck by the fact that adoption mirrors God's relationship with us.

"In bringing joy to others, in redeeming others" through adoption, "we allow ourselves to be redeemed in the process," added Rabbi Mitchell Rocklin, resident research fellow at the Tikvah Fund.

"We need to live by example in this area," he said of pro-lifers. "I think it's a cultural change that needs to happen."