What it Takes to Stay with Jesus: Pope Francis shares special message during Angelus

In his Sunday Angelus address, Pope Francis said that following Jesus requires the courage to leave behind the sins that are holding us back. 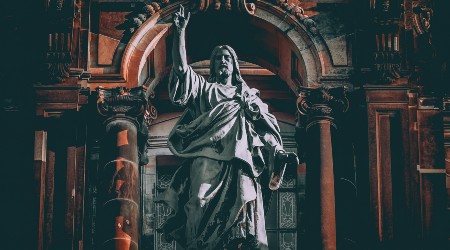 Image by Couleur from Pixabay

Speaking from the window of the Apostolic Palace on Jan. 22, the pope said that "our vices and our sins" are like "anchors that hold us at the shore and prevent us from setting sail."

"To stay with Jesus, therefore, requires the courage to leave, to set out. To leave what? Our vices and sins," he said.

Pope Francis added that in order to set out on the "new adventure" of following Christ it is right to start by asking forgiveness, as well as leaving behind "what holds us back from living fully."

"It also means giving up the time wasted on so many useless things," he said.

The pope pointed to the example of someone who chooses to spend time in prayer or serving others, instead of wasting time.

"I am also thinking of a young family who leaves behind a quiet life to open themselves up to the unforeseen and beautiful adventure of motherhood and fatherhood -- it is a sacrifice, but all it takes is one look at a child to understand that it was the right choice to leave behind certain rhythms and comforts, to have this joy," Francis said.

Pope Francis asked people to reflect on what Jesus may be asking them to give up and leave behind in order to "say 'yes' to him,'" like the first disciples who left their nets on the shore of the Sea of Galilee to follow Christ.

"May Mary help us to respond with a total 'yes' to God, like she did, to know what to leave behind to follow him better," he said.

After praying the Angelus, Pope Francis asked people to pray for peace in Myanmar, Peru, Cameroon, and Ukraine.

The pope expressed his closeness to the civilian population in Myanmar, who have suffered "severe trials" since the military coup began in 2021.

"My thoughts, with pain, go in particular to Myanmar, where the church of Our Lady of the Assumption in the village of Chan Thar, one of the oldest and most important places of worship in the country, was set on fire and destroyed," he said.

The pope asked the crowd to pray a "Hail Mary" together to Our Lady of Myanmar asking that the conflict will end soon and that "a new time of forgiveness, love, and peace will begin."

Pope Francis also said that he was joining the Peruvian bishops' call for an end to acts of violence in the South American country.

"Violence extinguishes hope for a just solution to problems. I encourage all parties involved to take the path of dialogue between brothers of the same nation, with full respect for human rights and the rule of law," he said.

The pope expressed hope that progress is being made toward a resolution of the conflict in English-speaking regions of Cameroon.

"I encourage all the signatory parties to the agreement to persevere on the path of dialogue and mutual understanding because the future can be planned only in encounter," the pope said.

Pope Francis also wished a "happy new year" to all who celebrate the Lunar New Year in East Asia and other parts of the world, adding that he was thinking of "all those who are still going through moments of trial caused by the coronavirus pandemic."

The pope reminded everyone that the Third Sunday of Ordinary Time is dedicated in a special way to the Word of God.

Before the Angelus, Pope Francis formally conferred the ministries of lector and catechist upon four men and six women at a Mass in St. Peter's Basilica celebrating the Sunday of the Word of God.

"Let's rediscover with amazement the fact that God speaks to us, especially through the holy Scriptures. Let's read them, study them, meditate on them, and pray with them. Every day we should read a passage from the Bible, especially from the Gospel. There Jesus speaks to us, enlightens us, guides us," the pope said.