In his Angelus address on Sunday, Pope Francis said that God's justice is often misunderstood as mere punishment when in reality it "raises us up" by "freeing us from the snares of evil." 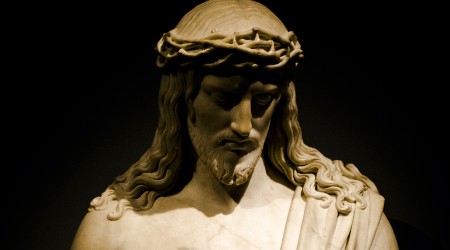 Photo by Alessandro Bellone on Unsplash

On the Feast of the Baptism of the Lord on Jan. 8, the pope said that "Jesus reveals God's justice."

Speaking from the window of the Apostolic Palace, he said: "Very often we have a limited idea of justice and think that it means: those who do wrong pay ... and in this way compensate for the wrong they have done."

"But God's justice, as the Scripture teaches, is much greater: it does not have as its end the condemnation of the guilty, but their salvation and rebirth, making them just."

The pope said that God's justice is not "intended to distribute penalties and punishments but rather, as the Apostle Paul affirms, it consists of making us, his children, righteous (cf. Rm 3: 22-31), freeing us from the snares of evil, healing us, raising us up again."

Jesus revealed the meaning of his mission when he was baptized on the banks of the Jordan River, the pope explained: "He came to fulfil divine justice, which is that of saving sinners; he came to take on his own shoulders the sin of the world and to descend into the waters of the abyss ... of death, so as to rescue us from drowning."

Pope Francis quoted a homily that Benedict XVI gave in January 2008 in which the late pope said: "God desired to save us by going to the bottom of this abyss himself so that every person, even those who have fallen so low that they can no longer perceive Heaven, may find God's hand to cling to and rise from the darkness to see again the light for which he or she was made."

Francis urged all Christians to also exercise justice in this way in relationships with others, not condemning or dividing, but with "the mercy of those who welcome by sharing the wounds and frailties of their sisters and brothers, so as to lift them up."

The Feast of the Baptism of the Lord commemorates Jesus' baptism in the Jordan River by St. John the Baptist.

Earlier in the day, Pope Francis baptized 13 babies in the Sistine Chapel and encouraged parents to teach their children to celebrate their baptism anniversary each year "like a birthday."

Pope Francis repeated this message at the Angelus and told the crowd that he was giving everyone "homework" to find out their baptism date and celebrate it.

At the end of his Angelus address, the pope urged people to remember to pray for those who are suffering in Ukraine. He said that he was thinking especially today of mothers --- both Ukrainian and Russian --- who have lost their children in the Ukrainian war and entrusted them to the Blessed Virgin Mary.

Pope Francis also extended a special greeting to a choir from Bethlehem who attended the Angelus address in St. Peter's Square.

"Thank you for bringing your Christian witness from the Holy Land," he said.