Most people believe they know about the Apostles, the Twelve men, called by Christ to evangelize. But if you ask anyone to name them, you will get a variety of answers. Most can't come up with twelve names, and others come up with different names for the 12. Why the confusion? The answer may surprise you! 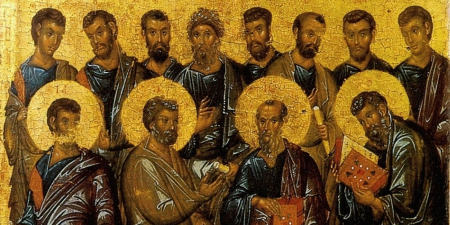 How many Apostles were there?

LOS ANGELES, CA (California Network) - As it turns out, there were more than 12 Apostles. There are 22 people mentioned as Apostles by name in the Bible. And one passage in the Book of Luke suggests there were as many as seventy during Christ's earthly ministry.

First, let us clarify the difference between Disciple and Apostle, which itself is a matter of some confusion.

The New Testament often refers to the Disciples of Jesus. According to the Catechism, Disciples are "Those who accepted Jesus' message to follow him." (CCC 767, 787) In common usage, disciple refers to the followers of Jesus. However, this is often confused with Apostle. The Catechism defined Apostle as, "...one who is sent as Jesus was sent by the Father..." (CCC 857)

In other words, a disciple is a follower, an apostle is one who is sent on a mission.

In a broad sense, we are both disciples and apostles of Jesus Christ. We are of course, followers of Christ. But we also have a mission to share the Gospel. Therefore, it is possible to be both.

In the Bible, the Apostles are those who are chosen by Jesus and assigned a mission by Him. That mission being to preach and baptize all nations.

In the Gospels, twelve men are listed as the first Apostles. They are (alternative names in parentheses):

Judas was replaced with Matthias (13).

Other Apostles mentioned in the Bible are:

There are also, of course:

The last three contributed entire books and letters to the New Testament.

Another way to think of an Apostle might be to think "bishop," since that is who today's bishops are. (CCC 860) They are literally the successors of the original 12 Apostles. In fact, there is an unbroken line of succession, from Jesus Christ to the original 12 Apostles, to all the other apostles, all the way down through 2,000 years of history, to the bishops of the Church today. And this authority is passed by the laying of hands. When you were confirmed in the Church, your bishop laid his hands upon your head and conferred the Sacrament upon you as well. So in a very real sense, there is an unbroken, physical connection reaching all the way back to Jesus Christ Himself.

Of course, it goes without saying we also encounter Christ, Body, Blood, Soul, and Divinity in Holy Communion. But this unbroken line of succession than extends to every Confirmed Catholic is also exciting to contemplate.

The fact is, we probably do not know the names of every person called "apostle" in that first century following the life of Jesus Christ.

As for "who are the 12 Apostles?" typically the answer is limited to the first 12, listed above. However, because people like Mark, Luke, and Paul were also Apostles, it is appropriate to include them as well. Any list which names the people above is correct.

We know very little about some of the Apostles mentioned in the Bible. For a few of them, we merely know their names. We have no writings or teachings from them. For others, we have entire Gospels. This adds to the confusion, since Apostles like Matthew, Mark, Luke, John, and Paul come to mind immediately, whereas Apostles like Thaddeus or Silas almost never come to mind.

As lay people, we are called to support the work of the Apostles, which continues today. One way we can do this easily is by giving. If you learned something today, please help us teach others too. Support the Apostolate by giving today!