'God can speak to us in the unexpected moments'

Free World Class Education
FREE Catholic Classes
God can speak to us in the unexpected moments of our lives if we learn to listen well to what he is telling us in our hearts, Pope Francis said on Wednesday.

"I will give you a piece of advice: beware of the unexpected," the pope said Sept. 7 at his weekly public audience. 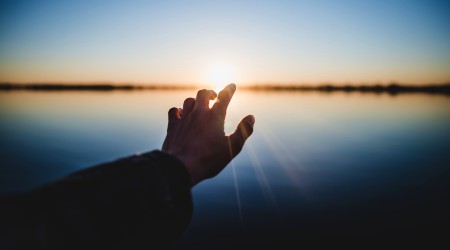 Photo by Marc-Olivier Jodoin on Unsplash

Francis' general audience was again in St. Peter's Square Wednesday after it was held inside the Vatican's Paul VI auditorium in August to avoid the worst of the summer heat.

The pope opened and closed his encounter with the public by riding the popemobile around the square. The audience marked his second week of catechesis on the theme of "Discernment."

As part of discernment, the pope encouraged people to reflect on their reactions to even small, unexpected circumstances, such as the surprise arrival of one's mother-in-law.

"I was quiet at home and 'Boom!' -- my mother-in-law arrives; and how do you react to your mother-in-law? Is it love or something else inside? You must discern," he said. "I was working well in the office, and a companion comes along to tell me he needs money: how do you react? See what happens when we experience things we were not expecting, and there we can learn to know our heart as it moves."

Pope Francis said knowing how to really listen to your heart is an important part of discernment in making a judgment or decision about something.

To illustrate his point, the pope recalled the story of the conversion of St. Ignatius of Loyola, a soldier enamored with stories of knights and chivalry who was forced to confront his future happiness after he was badly injured in battle.

Bored while his leg was healing, Ignatius read stories of the saints and the life of Jesus when other books were not available to him.

Francis quoted from Ignatius' autobiography, in which the future saint wrote about himself: "'When he thought of worldly things' -- and of chivalrous things, one understands -- 'it gave him great pleasure, but afterward he found himself dry and sad. But when he thought of journeying to Jerusalem, and of living only on herbs and practicing austerities, he found pleasure not only while thinking of them, but also when he had ceased.'"

"In this experience we note two aspects, above all," the pope said. "The first is time: that is, the thoughts of the world are attractive at the beginning, but then they lose their luster and leave emptiness and discontent; they leave you that way, empty. Thoughts of God, on the contrary, rouse first a certain resistance -- 'But I'm not going to read this boring thing about saints' -- but when they are welcomed, they bring an unknown peace that lasts for a long time."

He emphasized that "discernment is not a sort of oracle or fatalism, or something from a laboratory, like casting one's lot on two possibilities."

Francis also said that some of life's big questions often arise after "we have already traveled a stretch of the road in life."

Sometimes, we can get stuck on one idea and end up disappointed, he pointed out, adding that doing something good, such as a work of charity, can get us out of that rut by bringing us joy and happiness, feelings that can lead to thoughts of God.

The pope also shared a piece of wisdom from St. Ignatius: to read the lives of the saints.

"Because they show the style of God in the life of people not very different to us, because the saints were made of flesh and blood like us, in a narrative, comprehensible way. Their actions speak to ours, and they help us to understand their meaning," he said.

Sometimes, he added, "there is an apparent randomness in the events of life: everything seems to arise from a banal mishap -- there were no books about knights, only lives of saints. A mishap that nonetheless holds a possible turning point."

"God works through unplannable events, and also through mishaps," he said. "Mishap: What is God saying to you? What is life telling you there?"

At the end of his general audience, Pope Francis expressed his closeness to all mothers, and "in a special way, to those mothers who have children who suffer: those who are sick, those who are marginalized, those who are imprisoned."

"A special prayer goes to the mothers of young detainees: let hope never be lacking. Unfortunately, in prisons there are many people who take their own life, at times also young people. A mother's love can save them from this danger. May Our Lady console all mothers distressed by the suffering of their children," he said.