St. Januarius' blood has liquified for the first time this year. Archbishop Domenico Battaglia of Naples opened the safe holding St. Januarius' blood on April 30 and found that it had liquified, according to Catholic News Agency. Traditionally, this miracle happens up to three times a year. 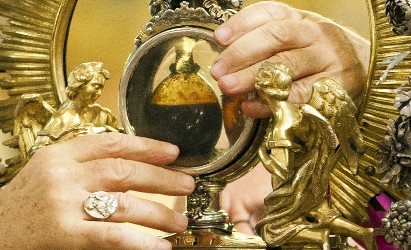 LOS, ANGELES, CA (Catholic Online) -  The Neopolitan lore states that the "failure of the blood to liquefy signals war, famine, disease, or other disaster."

After discovering that the blood had indeed liquified, a traditional procession took place through the narrow streets of Naples from the cathedral to the Basilica of St. Clare.

"If we are here tonight it is because Bishop Januarius took this Word seriously, following the Lord Jesus to the end, even to the point of shedding his blood, even to the point of giving his life, knowing that there is no greater love than one who gives his life for his friends," Archbishop Battaglia said in his homily during the Mass to mark the liquefaction of St. Januarius' blood.

"Too many times in this still short time I have lived here in Naples have I had to caress the faces of young mothers wounded by the unprecedented pain of the loss of their child, killed through no fault of their own, perhaps in the context of an argument between boys."

The archbishop believes that this current liquefaction was an inivitation to Naples' people to "stop the flow of innocent blood, the hands of brothers who hurl themselves against brothers, the wounds that tear the social, educational, economic fabric of our city and the whole world."

"How important is all this in such a complex, difficult, heavy time in which the blood of our martyr Januarius, a luminous sign of the blood of the One who loved us by offering Himself for us on the cross, continually reminds us of the blood of so many small, innocent victims of evil, violence, malfeasance, and war," Battaglia continued.

According to Catholic News Agency, "The liquefaction of St. Januarius' blood traditionally happens three times a year: the first Saturday of May, Sept. 19, the saint's feast day, and Dec. 16, the anniversary of the 1631 eruption of nearby Mount Vesuvius."