Is Lent working for you? If not, try this...

How's your Lent going? Let's talk about how the faithful can upgrade their Lenten experience. 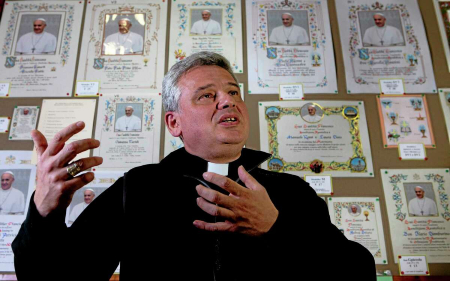 LOS ANGELES, CA (California Network) - For many Catholics, Lent is something of a grind. A real chore. It's a period of sacrifice, but one made so they don't disappoint others around them. For others, it's easy because it consists of giving up sugary beverages or chocolate. For both groups, Lent is unsatisfying, and they are looking forward to Easter, because then it's all over for another year.

When Lent is done right, it is nothing like a chore. Yes, there are sacrifices and some challenges, but these are happy sacrifices, even when they are tough. They pay off because they change you in a profound way. They change your life.

Lent is a beautiful time of year because your faith community is sacrificing alongside you. You have mutual support from others, which you might not have during other times of the year. Your friends lift you up, and you can compare experiences and encourage one another.

Lent is a time for cleaning up your life. By eliminating distractions and things which are unhealthy, you find you have more time for good things, from better diet, to exercise, to more time to pray and devote to God.

Sadly, many people haven't graduated from giving up sodas, or candy, or social media, things that we would expect a teenager to do without for 40 days. But such sacrifices do little to change adult lives. Lent is like that. What you invest determines what you get back. Invest little and you will have little to show for it. Invest a lot, and it can truly change your life.

This secret, if you will, was explained by the Vatican Almoner, Archbishop Konrad Krajewski. When Pope Francis arrived at the Vatican, he visited the archbishop in his office and instructed him to go out and distribute alms in person. However, the archbishop protested, referring to the mountain of work on his desk. Pope Francis ordered, "Sell your desk."

Archbishop Krajewski later discussed his experience, explaining that giving can change you. But there's a trick to it: "it has to cost you so it can change you." The archbishop spoke about how priests visiting the Vatican would give pocket change to homeless people in the area, but that it made little difference to anyone. He explained that when he reached down into his pocket and gave a lot more, enough to miss a meal, or several meals, it changed who he was as a person.

This makes sense. When we give so that we must truly sacrifice, we are forced to change.

Giving up sweets doesn't do much for anyone. It might save a pound of weight, or a few dollars here and there, but that money is later spent on something else just as decadent. In the end, the sacrifice doesn't do much, because it did not cost anything.

The final tip therefore, from the Archbishop himself, is to make Lent work by making a real sacrifice. Something that costs you. No, not your mortgage, but perhaps a meal, or several. There are plenty of wonderful charities worthy of giving.

One we will recommend is Your Catholic Voice Foundation, which generously supports Catholic Online School. The school is dedicated to providing a free, world class Catholic education to anyone, anywhere.

When you do upgrade your Lent, do so prayerfully and let the experience change you. You may find Lent becomes a season you look forward to in the many years to come!