Imagine standing before Christ at the 'Threshold of Eternity'

Free World Class Education
FREE Catholic Classes
'The Word of God warns us today: This world will pass away and only love will remain...'

When one is faced with an important difficult decision, Pope Francis' advice is to imagine standing before Christ at the "threshold of eternity" because that is what ultimately matters. 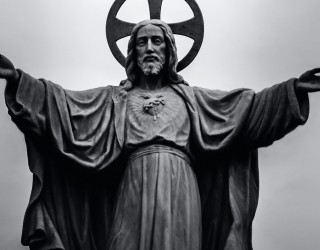 Photo by Arturo Rey on Unsplash

Speaking from the window of the Apostolic Palace to pilgrims gathered in St. Peter's Square below, the pope urged people to reflect on whether their time is spent focusing on things that are transitory or in "the ultimate things that remain."

"Brothers and sisters, let us ask ourselves: what are we investing our lives in? On things that pass, such as money, success, appearance, physical well-being? ... When our time comes ... we have to leave everything behind," Pope Francis said in his Angelus address on Nov. 14.

"The Word of God warns us today: This world will pass away and only love will remain," he said.

Pope Francis recalled Jesus' parable in which he warned not to build one's life on sand, but to lay a solid, deep foundation on rock.

"According to Jesus, the faithful disciple is the one who founds his life on the rock, which is his Word (cf. Mt 7:24-27), which does not pass away, on the firmness of the Word of Jesus: this is the foundation of the life that Jesus wants from us, and which will not pass away," the pope said.

"Those who do good are investing in eternity," he said.

"When we see a person who is generous and helpful, meek, patient, who is not envious, does not gossip, does not brag, is not puffed-up with pride, does not lack respect (cf. 1 Cor 13:4-7), this is a person who builds Heaven on earth."

Those who do good may not make headlines or receive any recognition for their good efforts, the pope acknowledged, but he underscored that "what they do will not be lost because good is never lost. Good lasts forever."

"Here then is some advice for making important choices," Pope Francis said.

"When one does not know what to do, how to make a definitive choice, an important decision, a decision that involves Jesus' love ... before deciding, let us imagine that we are standing in front of Jesus, as at the end of life, before Him who is love."

"And imagining ourselves there, in His presence, at the threshold of eternity, we make the decision for today. We must decide in this way: always looking to eternity, looking at Jesus. It may not be the easiest, it may not be the most immediate, but it will be the right one, that is sure," he said.

At the end of his Angelus address, Pope Francis reminded the crowd that the Church is celebrating the World Day of the Poor this year with the theme: "The poor you will always have with you."

The pope offered a Mass for the World Day of the Poor earlier in the day in the presence of 2,000 people living in poverty and the volunteers who assist them, according to the Vatican.

"The cry of the poor, united with the cry of the Earth, resounded in recent days at the United Nations Climate Change Summit COP26 in Glasgow," Pope Francis said in the Angelus.

"I encourage all those with political and economic responsibilities to act now with courage and vision; at the same time, I invite all people of good will to exercise active citizenship for the care of the common home."

Pope Francis noted that he was also praying for people with diabetes and those who care for them on World Diabetes Day.

"To base one's life on the Word of God ... is not an escape from history, but an immersion into earthly realities in order to make them solid, to transform them with love, imprinting on them the sign of eternity, the sign of God," Pope Francis said.

"May Our Lady help us to make the important choices in life as she did: according to love, according to God," he said.