Sainthood cause opened for 'earthly guardian angel' of Auschwitz

The sainthood cause of a Polish Catholic who dedicated herself to helping fellow prisoners at Auschwitz concentration camp has opened. 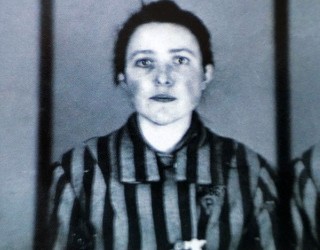 Bishop Andrzej Jez of Tarnow issued an edict announcing the start of the cause of Stefania Lacka, who camp inmates referred to as their "earthly guardian angel."

Jez said that he took the step after consulting with the Polish bishops' conference and obtaining permission from the Vatican Congregation for the Causes of Saints.

He invited those with documents related to Lacka to send them to the diocese by Sept. 7 for the attention of Fr. Stanislaw Sojka, postulator of the cause.

Lacka (pronounced "Wonska") was born on Jan. 6, 1914, in Wola zelichowska, a village in southern Poland. She attended a teacher-training institution, graduating in 1933.

From 1934 to 1939, she worked for Nasza Sprawa ("Our Case"), the Catholic weekly publication of the Diocese of Tarnow, writing 700 articles and editing the children's supplement Kroluj nam Chryste ("Christ, reign over us").

After the Nazi German invasion of Poland on Sept. 1, 1939, the editorial team offered its skills to the Polish underground movement.

The Gestapo, the Nazi secret police, arrested Lacka and other members of the team on April 16, 1941.

She was held at the Gestapo headquarters in Tarnow and later at the local prison. She was interrogated and tortured, but did not reveal the names of any of her associates.

Lacka was transported on April 27, 1942, with 60 other female prisoners to Auschwitz, where she was assigned the number 6886.

In June 1942, a female prisoner escaped the camp. The authorities forced the prisoners to stand in the roll-call square for two days waiting to discover who would be killed in retribution for the escape.

Bishop Jez's edict, dated July 26 but reported on the diocesan website on Aug. 8, said that Lacka was standing beside her friend, Helena Panek, as they awaited their fate. Lacka promised that if Panek was selected then she would go to her death with her. But the authorities were ordered not to proceed with their planned punishment.

While caring for the sick, Lacka fell ill with typhus and was admitted to the camp hospital in block 23.

She recovered by the spring of 1943 and began working in the camp hospital as a nurse, using her proficiency in German to help her patients.

"Risking her own life, she baptized newborns and ministered to people who were seriously ill," Jez noted in the edict. "She also watched over the dying, sweetening their last hours of life."

"She encouraged other female prisoners to pray together with the dying. Risking her own life, she also saved sick women during selection for the gas chamber or phenol injection by crossing them off the death list. Her fellow prisoners called her the 'earthly guardian angel.'"

She wrote a camp prayer book that survived the Second World War intact.

Lacka left Auschwitz with five companions on Jan. 23, 1945, days after the camp was bombed. She returned to her family home in Wola zelichowska, where she attended daily Mass and helped her family.

She began studying Polish philology at the Jagiellonian University in Krakow, but her health deteriorated and she was admitted to a hospital in the city in October 1946.

In his edict, Bishop Jez said that Lacka's spirituality offered an example for Christians today.

"Stefania Lacka was distinguished for her high degree of the virtues of faith, hope, love, and moral virtues," he wrote. "From the day of her funeral until now, her private cult has been growing."