Blind and disabled, St. Margaret of Castello overcame unimaginable hardships in her lifetime

Margaret of Castello has been made a saint of the universal Church by Pope Francis. 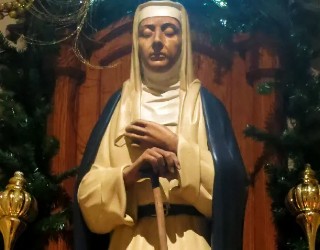 St. Margaret of Castello's feast day is celebrated on April 13.

LOS ANGELES, CA (Catholic Online) - The Holy Father has recognized the sanctity of St. Margaret of Castello, a blind, disabled noblewoman who was rejected by her parents.

By extending her veneration to the universal Church, the recognition of St. Margaret of Castello's sanctity is through the process of equivalent canonization.

Many hold a warm place in their hearts for Margaret, as her story is a heart-wrenching one. Due to her disabilities, her rich parents saw her as a disappointment, rejected her and hid her away for years. They walled her into a cell built on the side of a chapel, eventually abandoning her to a town where she new no one.

She was discovered by local towns people who began caring for her and she was later admitted to the Third Order of St. Dominic. While remaining a laywoman, Margaret received a religious habit.

Appreciative of her neighbors kindness in taking care of her, Margaret opened up a small school where she taught children the Psalms she had memorized.

After her death, in 1320 at 33-years-old, Margaret was buried inside the church and her tomb quickly became associated with miracles.

Margaret's disabilities did not hinder her in her faith or life goals. She was widely known for her deep faith and holiness.