'Letting ourselves be carried by God': Pope Francis invites us all to rediscover the beauty of the rosary

Free World Class Education
FREE Catholic Classes
'The recitation of the rosary is the most beautiful prayer we can offer to the Virgin Mary.'

Pope Francis invited Catholics to rediscover the beauty of the rosary prayer this month, encouraging people to carry a rosary with them in their pockets. 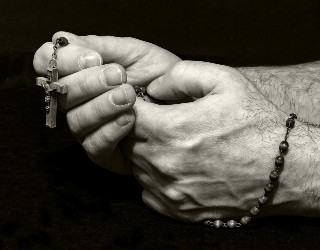 Image by Myriam Zilles from Pixabay

Vatican City (CNA) - "Today is the feast of Our Lady of the Rosary. I invite everyone to rediscover, especially during this month of October, the beauty of the prayer of the rosary, which has nourished the faith of the Christian people through the centuries," Pope Francis said Oct. 7 at the end of his Wednesday audience in the Paul VI Hall.

"I invite you to pray the rosary, and to carry it in your hands or in your pockets. The recitation of the rosary is the most beautiful prayer we can offer to the Virgin Mary; it is a contemplation on the stages of the life of Jesus the Savior with his Mother Mary and is a weapon that protects us from evils and temptations," he added in his message to Arabic-speaking pilgrims.

The pope said that the Blessed Virgin Mary has urged the recitation of the rosary in her apparitions, "especially in the face of the threats looming over the world."

"Even today, in this time of pandemic, it is necessary to hold the rosary in our hands, praying for us, for our loved ones and for all people," he added.

This week Pope Francis resumed a cycle of Wednesday catechesis on prayer, which he said had been interrupted by his decision to dedicate several weeks in August and September to Catholic social teaching in light of the coronavirus pandemic.

Prayer, the pope said, is "letting ourselves be carried by God," especially in moments of suffering or temptation.

"In some evenings we can feel useless and lonely. It is then that prayer will come and knock on the door of our hearts," he said. "And even if we have done something wrong, or if we feel threatened and frightened, when we return before God with prayer, serenity and peace will return as if by miracle."

Pope Francis focused on Elijah as a biblical example of a man with a strong contemplative life, who was also active and "concerned with the events of his time," He pointed to the passage in Scripture when Elijah confronted the king and queen after they had Nabot killed to take possession of his vineyard in the first Book of Kings.

"How much we are in need of believers, of zealous Christians, who act before people who have managerial responsibility with the courage of Elijah, to say, 'This must not be done! This is murder,'" Pope Francis said.

"We need Elijah's spirit. He shows us that there should be no dichotomy in the life of those who pray: one stands before the Lord and goes towards the brothers to whom He sends us."

The pope added that the real "proof of prayer" is "love of one's neighbor," when one is prompted through a confrontation with God to serve one's brothers and sisters.

"Elijah as a man of crystalline faith ... a man of integrity, incapable of petty compromises. His symbol is fire, the image of God's purifying power. He will be the first to be put to the test, and he will remain faithful. He is the example of all people of faith who know temptation and suffering, but do not fail to live up to the ideal for which they were born," he said.

"Prayer is the lifeblood that constantly nourishes his existence. For this reason, he is one of those most dear to the monastic tradition, so much so that some have elected him as the spiritual father of the life consecrated to God."

The pope warned Christians against taking action without first discerning through prayer.

"Believers act in the world after having first kept silent and prayed; otherwise, their action is impulsive, it is devoid of discernment, it is rushing without a destination," he said. "When believers behave in this way, they do so many injustices because they did not go to pray to the Lord first, to discern what they must do."

"Elijah is the man of God, who stands as a defender of the primacy of the Most High. And yet, he too is forced to come to terms with his own frailties. It is difficult to say which experiences were most useful to him: the defeat of the false prophets on Mount Carmel (cf. 1 Kings 18:20-40), or his bewilderment in which he finds that he is 'no better than [his] ancestors' (see 1 Kings 19:4)," Pope Francis said.

"In the soul of those who pray, the sense of their own weakness is more precious than moments of exaltation, when it seems that life is a series of victories and successes."