Jesus Died to Save You From Your Sins. Whaat?

I live in South Carolina, where signs outside country churches remind you that "Jesus Saves." Complete strangers are likely to ask if you've been "born again" or have "a personal relationship with the Lord Jesus." Down south, the old-time religion is still emblazoned on billboards, preached from pulpits and radio shows. Television preachers still weep and rage and remind you that "Jesus' blood will wash away your sins" and that the Lord Jesus "died to take away the sins of the world." 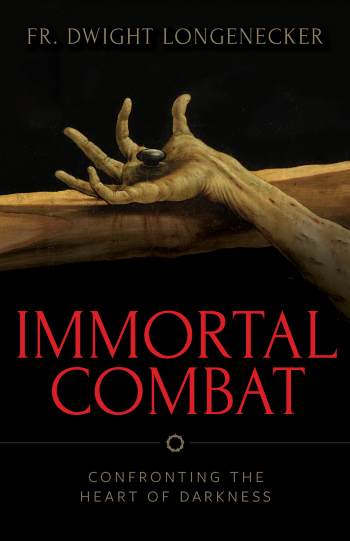 I've always been sympathetic to the non-believer who hears this religious jargon, scratches his head, and really, honestly doesn't get it. He might well ask, "Excuse me, what exactly does that mean, 'Jesus saves'? What am I saved from? What is he saving?"

I sympathize when they ask, "What does a person executed for sedition in the backwater of the Roman Empire two thousand years ago have to do with me? How, exactly does his death take away the selfish things I've done, and were my 'sins' really so bad anyway? Hey, I've never murdered anybody!"

If this bewildered head scratcher encounters Catholic Christianity, he will become even more befuddled by what seems cryptic and creepy language. He hears, "This is my Body. This is my Blood. Unless you eat my Flesh and drink my Blood you do not have life within you." The priest solemnly pronounces, "Behold the Lamb of God who takes away the sins of the world," and if he listens carefully, the questioner will hear the priest mumbling about "this offering, this oblation, this sacrifice" or "this victim, this pure victim, this spotless victim."

Surely we can be sympathetic to the modern person who, having listened carefully, is more than bewildered. He is offended and asks, "We're talking about blood sacrifice here right? We don't do that anymore. We don't sacrifice goats to the fertility goddess to have healthy babies and make the crops grow."

He might add, "Furthermore, if I am hearing you correctly, you're actually talking about human sacrifice. C'mon. We're not Neanderthals. We're not Aztecs, for goodness sake. We're not the wild-eyed, heart-plucking devotees of some primitive Hindu cult, like in the second Indiana Jones movie. What's all this blood curdling talk about barbaric gods who need to be appeased with human sacrifice? Surely we're beyond such voodoo demon talk?"

I am not only sympathetic to anyone who asks such questions, but I am also convinced that most Christians of every persuasion would be hard pressed to explain the religious language they take for granted.  So how would you explain the phrase 'Jesus died to save you from your sins' to a non-Christian who doesn't have a clue what on earth you're talking about?"

There's a frustrating problem here. The very heart of the Christian Faith 'the death and resurrection of Jesus Christ' has become obscured by religious language, customs, and concepts that mean virtually nothing to someone who has not been educated in that religion. Modern people don't get it. The death of Christ has become a stumbling block rather than a stepping-stone. It's a wall where it should be a door.

Even worse, because they are poorly catechized, an awful lot of Catholics have simply opted out of attempting an explanation. Once they started to think it through, they came up empty. They haven't stopped believing in God; they might even respect and believe in Jesus in some vague sort of way, but if they were asked to explain what the Crucifix means or how Jesus' death has anything to do with them and their daily life, they'd come up with a mere shrug of the shoulders or a quizzical look.

In other words, they don't understand the phrases "Jesus died to save you from your sins" or "Behold the Lamb of God who takes away the sins of the world" any more than the befuddled non-Christian in the street.

Their confusion is understandable. In a utilitarian age, a practical people are right to wonder what the death of a criminal two thousand years ago has to do with them. In a scientific age, we wonder what ritual sacrifice has to do with our lives. In a hi-tech, seemingly civilized society, it is perfectly fair for people to be bewildered by religious notions linked with animal and especially human sacrifice. We are not primitive Stone Age people living in the jungle. Blood sacrifices seem barbaric, cruel, pointless, and superstitious.

I'm convinced that the words "Behold the Lamb of God who takes away the Sins of the World" are more important than ever, but to understand this great mystery we first have to ask what "the Sin of the World" is. The "Sin of the World" is not the naughty things you've done. It is not the long list of good things you've left undone. Those are just the symptoms of the cancer. They're the surface problem. The real problem is much deeper and is woven through the fabric of the world like a dark thread. The darkness is lodged in our hearts like a sickness--a hideous cancer that cannot be cured except through a supernatural transaction.

My new book Immortal Combat-Confronting the Heart of Darkness explains the reality of the Sin of the World and how the cross and resurrection of Jesus Christ breaks the chains from the inside out. I show how this powerful event in the center of time can be lived out in our day to day lives. Only as we come to understand what the "Sin of the World" is can we really experience the power of Christ's victory. That experience is real and once we get it into our heads and hearts we can begin to live it in our daily lives.

Fr Dwight Longenecker is the pastor of Our Lady of the Rosary Catholic Couch in Greenville, South Carolina. Check out Immortal Combat here.