St. John Henry Newman's meditations on the Litany of Loreto

Morning Star. Mystical Rose. Tower of Ivory. House of Gold. For centuries, Catholics have recited these titles of Mary in the Litany of Loreto prayer. 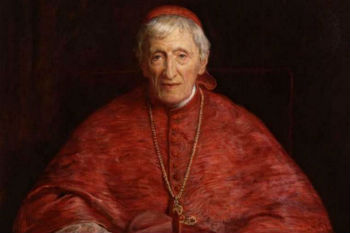 Loreto, Italy, (CNA) - Morning Star. Mystical Rose. Tower of Ivory. House of Gold. For centuries, Catholics have recited these titles of Mary in the Litany of Loreto prayer.

One of the Church's newest saints, St. John Henry Newman, wrote a series of meditations in 1874 elucidating the meaning behind each Marian title in the litany.

For Newman, many of these titles of Mary link back to her integral identity as the Immaculate Conception, born without the stain of original sin. Thus, the British saint connected a dogma declared 20 years prior by Pope Pius IX to a litany prayer approved by Pope Sixtus V in 1587.

"We must recollect that there is a vast difference between the state of a soul such as that of the Blessed Virgin, which has never sinned, and a soul, however holy, which has once had upon it Adam's sin; for, even after baptism and repentance, it suffers necessarily from the spiritual wounds which are the consequence of that sin," Newman wrote. "She never committed even a venial sin, and this special privilege is not known to belong to anyone but Mary."

The Marian title, "Mater Amabilis," today translated as "Mother most amiable," is connected to Mary's sinlessness, Newman explained: "Sin is something odious in its very nature, and grace is something bright, beautiful, attractive."

"There was a divine music in all she said and did - in her mien, her air, her deportment, that charmed every true heart that came near her. Her innocence, her humility and modesty, her simplicity, sincerity, and truthfulness, her unselfishness, her unaffected interest in everyone who came to her, her purity - it was these qualities which made her so lovable," Newman wrote.

Mary is particularly loveable "to the children of the Church, not to those outside of it, who know nothing about her," Newman said.

A convert himself, Newman's own thoughts on Mary developed from praising the holiness of the Mother of Christ as an Anglican preacher to defending Mary's role as intercessor in "Certain Difficulties Felt by Anglicans in Catholic Teaching Considered."

Newman was a 19th century theologian, poet, Catholic priest and cardinal. Born in 1801, he was before his conversion a well-known and well-respected Oxford academic, Anglican preacher, and public intellectual.

In October, Pope Francis declared Cardinal John Henry Newman a saint. That same month, the pope elevated the Dec. 10 feast of Our Lady of Loreto to the Church's universal Roman Calendar.

In his Loreto meditations, Newman sheds light on titles of Mary whose meaning may not immediately evident to a modern reader.

While an ivory tower is colloquially understood today as a privileged shelter from the practicalities of the real world, Newman connect's Mary's title, "Tower of Ivory," to her courageous presence at the execution of her son.

"When we say a man 'towers' over his fellows, we mean to signify that they look small in comparison of him," he wrote. "This quality of greatness is instanced in the Blessed Virgin. Though she suffered more keen and intimate anguish at our Lord's Passion and Crucifixion than any of the Apostles by reason of her being His Mother, yet consider how much more noble she was amid her deep distress than they were."

"It is expressly noted of her that she stood by the Cross. She did not grovel in the dust, but stood upright to receive the blows, the stabs, which the long Passion of her Son inflicted upon her every moment," Newman wrote. "In this magnanimity and generosity in suffering she is, as compared with the Apostles, fitly imaged as a Tower."

"Here first we must consider what is meant by justice, for the word as used by the Church has not that sense which it bears in ordinary English. By 'justice' is not meant the virtue of fairness, equity, uprightness in our dealings; but it is a word denoting all virtues at once, a perfect, virtuous state of soul - righteousness, or moral perfection; so that it answers very nearly to what is meant by sanctity," Newman wrote.

"Therefore when our Lady is called the 'Mirror of Justice,' it is meant to say that she is the Mirror of sanctity, holiness, supernatural goodness," he continued.

Newman further posited: "Do we ask how she came to reflect His Sanctity? - it was by living with Him. We see every day how like people get to each other who live with those they love ... Now, consider that Mary loved her Divine Son with an unutterable love; and consider too she had Him all to herself for thirty years. Do we not see that, as she was full of grace before she conceived Him in her womb, she must have had a vast incomprehensible sanctity when she had lived close to God for thirty years?"

Newman divided the titles of Mary in the Litany of Loreto into four categories: Immaculate Conception, the Annunciation, Our Lady of Sorrows, and the Assumption.

For example, Newman compares the "Morning Star" to Mary's Assumption into heaven: "Mary, like the stars, abides for ever, as lustrous now as she was on the day of her Assumption; as pure and perfect, when her Son comes to judgment, as she is now."

"It is Mary's prerogative to be the Morning Star, which heralds in the sun. She does not shine for herself, or from herself, but she is the reflection of her and our Redeemer, and she glorifies Him. When she appears in the darkness, we know that He is close at hand," he wrote.

By papal decree, the feast of Our Lady of Loreto will be celebrated for the first time as an optional memorial in the Roman calendar this year on Dec. 10. Cardinal Robert Sarah, prefect of the Congregation for Divine Worship, said in the October decree:

"This celebration will help all people, especially families, youth and religious to imitate the virtues of that perfect disciple of the Gospel, the Virgin Mother, who, in conceiving the Head of the Church also accepted us as her own."