Pope Francis warns Catholics to not profess ideology over faith

In his general audience Wednesday, Pope Francis warned Catholics to not turn their faith into an ideology, as he said St. Paul did when he was persecuting Christians before his conversion. 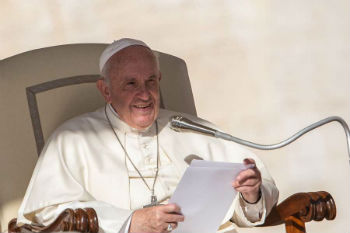 Vatican City, (CNA) - In his general audience Wednesday, Pope Francis warned Catholics to not turn their faith into an ideology, as he said St. Paul did when he was persecuting Christians before his conversion.

Reflecting on Saul's behavior toward Christians is a chance for everyone to consider how they are living their faith, he said, suggesting people ask themselves: "How do I live my life of faith? Am I going to meet others or am I against others? Do I belong to the universal Church, good, bad, everyone? Or do I have a selective ideology?"

"Do I love God, or do I love dogmatic formulations?" he continued. "How is my religious life? Does the faith in God that I profess make me friendly or instead hostile to anyone who is different from me?"

Pope Francis, in his catechesis, spoke about St. Paul before and after his conversion and baptism. Saul, as he was called then, wanted to "destroy the Church," the pope said, but later became "the instrument chosen by God to proclaim the Gospel to the nations."

The Acts of the Apostles recounts that Saul, with the approval of the high priest, was chasing and capturing Christians. Saul was doing this believing that he was serving the law of the Lord, Francis explained.

According to the pope, "the young Saul is portrayed as intransigent, that is, one who shows intolerance towards those who think differently from him..."

But while Saul is chasing down Christians, Christ is chasing down him, Francis stated. The Lord appears to Saul as light and voice on the road to Damascus, saying: "Saul, Saul, why do you persecute me?"

Pope Francis added that with this phrase the Lord is saying, "to strike a member of the Church is to strike Christ himself."

Only through Christ does Saul's transformation takes place, Pope Francis said. "Then he will teach that the true battle 'is not against flesh and blood, but against [...] the rulers of this dark world, against the spirits of evil.'"

Saul will go on to teach, he said, that "people should not be fought, but the evil that inspires their actions."

Saul then receives baptism, which marks for him, "as for each of us, the beginning of a life," the pope stated. The sacrament helps him to see God, himself, and others differently. His enemies become brothers in Christ.

"Let us ask the Father to let us too, like Saul, experience the impact of his love that can only make a heart of stone a heart of flesh, capable of embracing 'the same sentiments of Christ Jesus,'" he concluded.